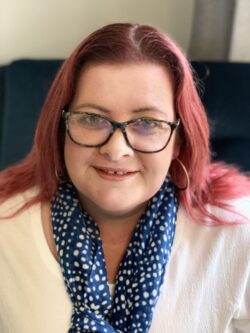 Lara Glasson is a straight up feminist, left-leaning, queer, humanist who cares deeply about people and the planet. Striving for fairness and equality for all is central to everything Lara sets out to do.

After battling through the boredom of high school and not trying hard enough to get into a law degree, she started her career as a teacher in both primary and secondary settings. Realising the inherent flaws in the system and an inability to change things, she took an unexpected turn towards business finance, but the urge to change the education system never really left her mind.

After the birth of her second child, she founded and ran a business supporting educational providers with resources and training, focused on planet-friendly resources and play-based pedagogies for learning and teaching in the early years.

With the death of her marriage due to domestic violence, so came the death of her business, and Lara was then ready to step into the law degree she had always wanted to do. After experiencing many of the hardships that come from life, law just wasn’t enough on its own for her anymore. Lara’s desire to change the education system had expanded to a desire to change society as a whole and she enrolled in a double degree to study both law and political science. Lara is completing her studies part-time because being a single mum to two mini humans is her #1 role for now, but she looks forward to the day that she can step into the next phase of her life and put her degrees and passion for change to good use.

Lara hosts her show every Tuesday; Precedents, Politics, and Indie Pop, which runs from 3pm to 4pm.