Home / News / Science and Research / If you want your child to be more resilient, get them to join a choir, orchestra or band

If you want your child to be more resilient, get them to join a choir, orchestra or band

One of the most important qualities for a young person to develop is resilience. This involves their ability to overcome adversity.

Resilience is perhaps more important now than ever. Today’s young people have been facing adversity on a mass-scale, thanks to COVID and all the disruptions to their education and social, home and working lives.

The good news is, resilience is not just something you are born with. It can be learned from our experiences and interactions with others.

Parents may not be aware that one way to develop resilience is through group music making, such as in a school or community choir, orchestra or band.

We wanted to investigate how group music making can develop skills beyond just learning to play an instrument or sing.

Our study is based on the Tasmanian Youth Orchestras, which include accomplished musicians aged from 14 to 25. This includes the state youth orchestra as well as two other orchestras, specialist ensembles and two choirs.

For our project, we collected comments from players, managers and conductors/teachers on a closed Facebook site and then did eight follow-up interviews.

Our findings show how qualities like teamwork, empathy and grit – all components of resilience – can be developed through group music making.

In order for a group of players to make a piece of music work, they have to work together.

People have to listen to each other, understand what is happening around them, and be prepared to change how they play something (slow or fast, loud or soft) depending on how the group is performing. You need to be able to value the contributions of other people, not just your own.

So, we found if you are playing in a band, you are learning team work skills. As David*, a conductor told us:

After a while, players realised that they were ultimately responsible to the other players not to the conductor. 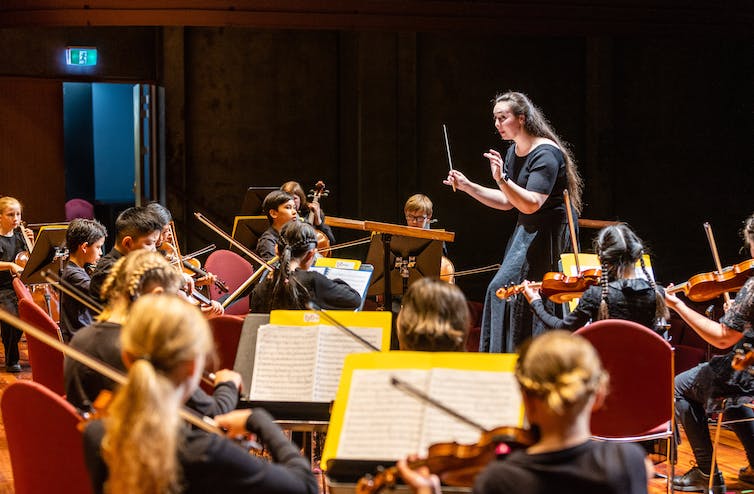 Players also need to be able to understand others in a group and share their feelings.

In a choir or orchestra, the music making is a shared creative experience – that involves the whole body. And this is where empathy comes in.

Empathy, like teamwork, can be cumulative, growing over time through rehearsals and performances, as players and teachers support one another. As brass player Tom said,

I have to understand that I am not always going to be the main focus of a piece.

Another player, Simon, told us about his realisation that other people were also having to work hard (and it wasn’t just about him).

You certainly aren’t the only person having to practise your doubles [playing two notes at once] for that piece.

It is important for young people to develop a “growth mindset”, where they understand effort makes them stronger and learning is a long-term commitment.

This is where grit also comes in: pursing a goal and sticking with it even if it takes a lot of work or gets difficult.

It can take many months to learn a piece of music up to performance standard. And learning an instrument requires practice every day. So commitment is a key part of learning music.

Lawrence, a player, told us about participating in his school musical:

There were many points throughout the year which I felt like giving up […] but it was something I had committed to […]. I kept working on playing the music to the best of my ability, even if it felt like I couldn’t do it.

Tory, a choir conductor, described performance as both “safe and unsafe”. Young people in a choir learn to deal with the unexpected as part of performance. And this takes a kind a bravery.

You’ve got safety in numbers, to some extent, but you are still stepping into the unknown every time you walk on stage to do a thing. You can rely on each other, because you’ve rehearsed, but stuff does go pear shaped. Stuff happens […] It’s an incredibly useful life skill to be able to go, ‘well, that sucked’ […] and go, all right ‘let’s [go again]’.

But what is so special about music in fostering resilience? Young people also work in sporting teams or academic assignments. They can also work together while playing games.

Playing music provokes activity in many different parts of the brain at the same time. Listening to music that we like triggers the pleasure/reward centre of the brain. Dopamine and serotonin are released, resulting in that “feel good” sensation, and providing an incentive to keep engaging with music.

Learning a musical instrument also strengthens connections in the brain, linking the auditory cortex to parts of the brain involved in the processing of complex information. This link has been shown to improve memory, motor functions and learning in other subject areas.

Making music with others also affects levels of the bonding hormone oxytocin, supporting a sense of togetherness, while reducing levels of the stress hormone cortisol, and boosting immune function.

For young people, music can provide valuable respite from study and daily life, and help manage and express their emotions.

So, if you want your child to be a team player who is empathetic and shows grit, our research suggests that joining a music group could be the answer.

*names have been changed