Home / News / Science and Research / Reminder: kangaroos are ‘vegetarian gladiators’ with kicks that can kill. An expert explains why they attack

Graeme Coulson, The University of Melbourne

Kangaroos can be dangerous. This week a 77-year-old man tragically died in Western Australia after an attack by a kangaroo, which was reported to be his pet. He is believed to be the first person killed in a kangaroo attack since 1936.

Kangaroos are wild animals. It’s important to remember that while they can make interesting pets, they have never been domesticated, so their behaviour is driven mostly by instinct.

All kangaroos are large animals with powerful arms and massive feet. The largest is the iconic red kangaroo, which can easily tower over a tall human. Kangaroos use their arms, claws and feet as weapons in male-male combat, and for self-defence against predators such as dingoes and wedge-tailed eagles.

Indeed, a pet kangaroo may perceive its human owner as a rival kangaroo or a potential predator, or perhaps both. As a result, kangaroos sometimes attack people, causing nasty and even fatal injuries.

Kangaroo attacks are rare, but not unheard of. Indeed, fewer than five people seek medical attention each year in New South Wales from kangaroo-related injuries.

While a kangaroo’s first response is usually to flee, it will attack if feels cornered or if it sees a human as a sparring partner. Of course, there are always exceptions to the rule.

They can cause serious injury. Their sharp claws can make deep cuts, and their powerful kicks can cause severe bruising and internal injuries.

But don’t get me wrong, kangaroos are essentially peace-loving herbivores. Their days are spent resting in patches of sunshine in winter or shade in summer, then leaving to feed in evening twilight and much of the night, through to early morning.

They are gregarious creatures, forming loose mobs of both sexes and all ages. Only two things disturb their peaceful foraging: fighting among males and the threat of becoming prey.

Kangaroos can live for up to around 20 years and they grow throughout their lives. Males grow faster than females, which means males can become very large indeed. An old man kangaroo may weigh 90 kilograms or more and easily stand more than two metres tall.

As males grow, their body proportions also change, giving them huge shoulders, long arms and sharp claws. Their feet grow less in relative terms, but are still formidable, with a long, sharp nail at the tip.

Male kangaroos use these features as weapons in male-male combat, as they kick, claw and wrestle each other in fights for dominance. Most fighting takes the form of ritualised, almost gentlemanly bouts as they hone their skills and learn their place in the hierarchy.

However, serious fights can still occur and males usually carry scars, torn ears and other injuries. Occasionally, these fights are fatal.

Standing up to dogs

Other than humans, dogs – including large pets and dingoes – are the main predators of kangaroos. Dogs usually operate in packs to attack and kill kangaroos by running them down.

Kangaroos avoid attacks by maintaining vigilance, giving warning foot-thumps and fleeing to safety. Large male kangaroos are less likely to flee and may use their size and weapons to defend themselves against any dog that comes too close.

Kangaroos will also seek refuge in streams and dams, standing in the water while the dogs pace the shore.

A large male kangaroo has the height and upper-body strength to kill any dog that enters the water, as the first European colonists learned when their hunting dogs were drowned.

Domestic dogs and kangaroos do not mix. Many attacks on people occur when a kangaroo defends itself against a dog, then the owner tries to intervene.

When kangaroos and humans interact

When female kangaroos are found dead or injured on the side of the road, or sometimes tangled in a fence, they often have a joey still alive in the pouch. Most people call wildlife rescue organisations to care for the joey, while some may take the joey home to raise as a pet. 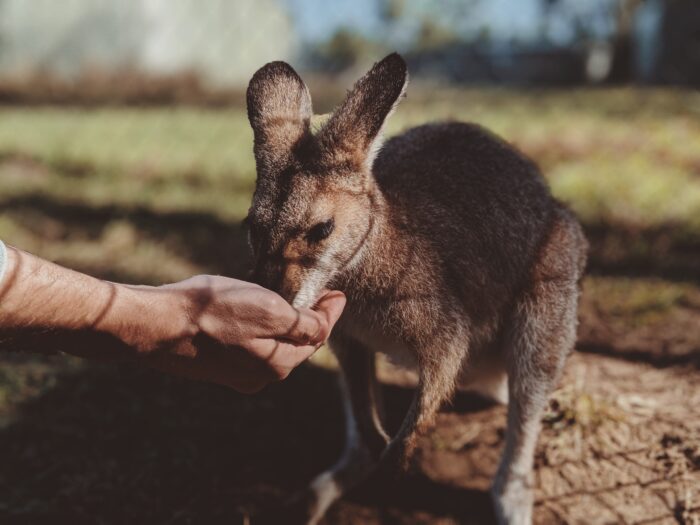 In Australia, a permit is usually required to keep a kangaroo as a pet, but regulations differ across the states and territories.

Hand-rearing a joey takes time and devotion, but can be rewarding as the youngster becomes imprinted on its human foster mother and faithfully follows them around.

As the youngster grows, it becomes more independent. By the time it reaches sexual maturity around 4 years of age, a hand-reared male is much bigger and is now quite a handful. Its foster mother could then become a sparring partner in practice fights, which are increasingly rough and dangerous as the young male continues to grow.

Another way we come into close contact with kangaroos is when we deliberately feed them. Kangaroos rapidly habituate to humans, losing their natural fear of us as they seek an instant food reward.

This reached has a dangerous extreme on the grounds of the Morisset Hospital on the New South Wales Central Coast, where domestic and international tourists deliberately feed the wild, resident kangaroos to get close-up photos. This unregulated activity has led to a number of attacks on people.

We share our unusual upright posture with kangaroos. This might make kangaroos endearing to us. However, the message received by the kangaroo is quite different. A kangaroo probably sees our vertical stance as a threat, so may lash out in self defence if we approach.

An adult male kangaroo may view our stance as a serious challenge, and if large and confident, may escalate and attack.

This reaction gave us the classic boxing kangaroo, once a feature of sideshows around Australia in the late 19th and early 20th Centuries. The kangaroo wore gloves to protect the human boxer from sharp claws, and the human kept well out of range of a stranglehold or raking kick.

Today we have a more enlightened view of animal behaviour, and recognise that kangaroos are fundamentally wild animals and are potentially dangerous.

If a kangaroo attacks, keep an eye on it and get away as quickly as possible while keeping low in a crouch, because the kangaroo is less likely to give chase. If the attack persists and you can’t escape, drop down low, curl into a ball, protect your head with your arms and call for help.