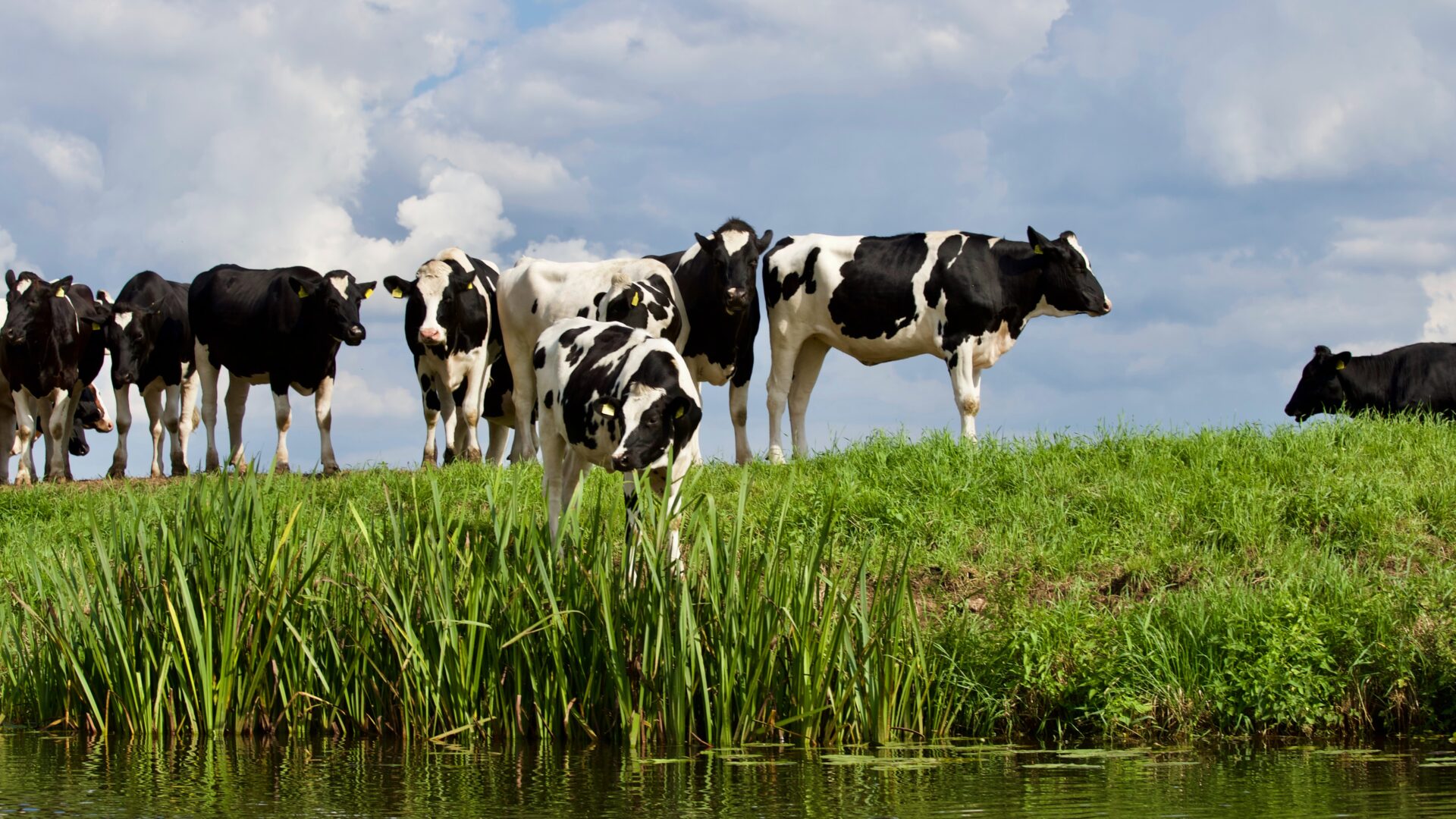 Home / News / News / How can we make animals happier?

We all know a person (or maybe we are one ourselves) who owns a dog that gets treated like royalty. They get spoiled with:

How happy must these dogs be to get all these ‘extras’? 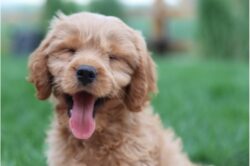 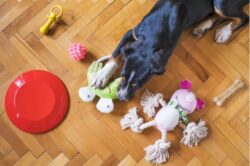 Well, these are all forms of environmental enrichment – which in broad terms aims to improve the welfare of animals by increasing the complexity of their environment. This allows animals to perform a greater range of behaviours, which can reduce the stress, boredom, and frustration they may feel when kept in an otherwise barren or inappropriate environment.

What is environmental enrichment?

Environmental enrichment can be grouped into five categories:

However, it is important to note that one specific enrichment may fit into multiple categories. For example, a trip to the dog park may encompass social, exercise, and sensory enrichment.

Additionally, environmental enrichments should be practical to implement, and be biologically relevant to the animal – for example, most dogs would not likely use a climbing frame meant for cats.

What about other animals?

So – we walk our dogs, play with them, and provide them with other toys so that they are happy and don’t destroy our furniture and garden out of boredom, but what about other animals?

When you think of a happy cow, what type of environment do you picture? Lush, green pastures as far as the eye can see? Well, this may be true, but compared to the dog surrounded by all his toys it might seem pretty bare – so is it enough? And, more specifically, which aspects of their environment are rewarding to them, and is there anything more we can give them to promote a higher standard of welfare?

Well, this is what a recent study focusing on dairy calves looked at. On many dairy farms, young calves are separated from their mothers and housed in pens until they are weaned from milk. These pens may often be relatively barren, despite providing adequate feed, water, and protection from the elements.

Therefore, some behavioural problems often develop under these conditions, including cross-sucking, bar biting, tongue playing, and eye rolling. It is thought that they are a result of either boredom, or as redirected behaviours from being unable to perform other natural behaviours.

In this new study, groups of five dairy calves were kept together, and provided with a variety of objects for enrichment: a mechanical and fixed brush, cowhide, and horizontal and vertical ropes. The calves had access to all enrichments constantly over a period of eight days. 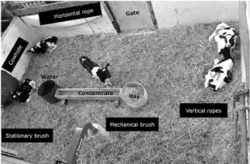 The setup for the study

Researchers monitored which enrichment device calves used the most (both the number of visits per day and the duration of these visits), as well as how each one was used. The cowhide and the ropes were used for licking, chewing, and biting – likely to replace suckling and grazing behaviours that usually occurred at this young age. As expected, the brushes were mostly used for grooming, which is in important behaviour for cattle, which they seem to enjoy and may use it as a method to destress.

Calves appeared to prefer the mechanical brush and the horizontal rope over the other enrichments. However, the use of most objects decreased over time, excluding the mechanical brush. This suggested that these brushes satisfied an ongoing need for grooming, or perhaps the change from a still to moving state made them unique and attractive.

Providing enrichments may also provide social benefits for the calves, as the ropes were often used by groups. This can encourage play and social behaviour, therefore further increasing welfare. Additionally, providing enrichments during an early age may also boost cognition in some species in later life.

Where to from here?

Young calves are curious and have a high motivation to explore their environment. The provision of multiple enrichment items in their pens can promote a higher standard of welfare for a multitude of reasons.

Furthermore, enrichment has the potential to boost the welfare and happiness of many species, including those housed in zoos, kept as livestock, and ones we keep at home as pets. Because of this, more and more research is focusing on which types of enrichments are preferred by certain animal species, and the specific benefits they may have on welfare – both in the short and long term.

Tune in to Tune at 106.9FM, or listen via our online web player.