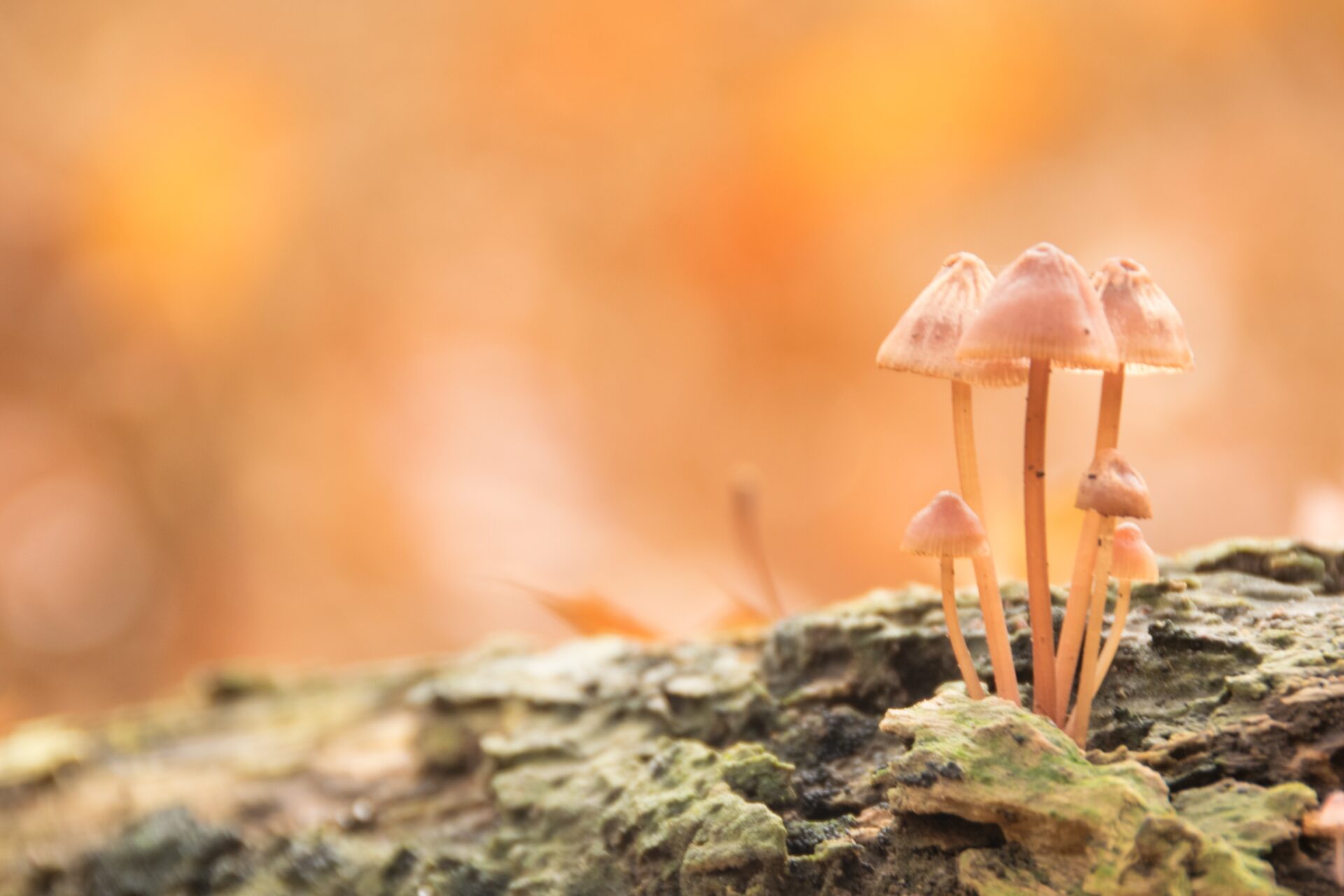 Home / News / Opinion / Get out and go fungal: why it’s a bumper time to spot our native fungi

Gregory Moore, The University of Melbourne

When COVID forced Melburnians to isolate during large parts of 2020 and 2021, many took the opportunity to walk around parks, creeks or remnant bush.

In your walks, you may have noticed the wonderful and diverse range of fungal fruiting bodies on display. Victoria’s display of puff balls, bracket fungi and fairy rings has been nothing short of splendid.

The fun’s not over, either. This year has been a particularly good one for fungus too, and here’s why. As you may recall, the harsh 2019-20 summer dried our soils, stressed much of our vegetation and led to major bushfires. In 2021, this switched abruptly to one of the wettest starts to a year on record in many places, courtesy of the La Niña climate pattern.

With the rains, the weather became ideal for fungal reproduction. We had warm, very moist soils and lovely warm and sunny autumnal days, perfect for fungi to send up their reproductive structures (you might know these as mushrooms and toadstools) and spread their spores. Conditions this good may not occur again for years so seize the opportunity to see them.

What you can see in a walk in the park

Fungi are not just for adults. Oh no! They can entertain children for hours.

In 2020, our family group took a walk in Brimbank Park, in Melbourne’s northwest. The five year old leader waved his lucky stick/sword/wand in the air as we entered, declaring, “today we hunt fungus!” He was still doing so two hours later, closely followed by his younger brother.

Their first findings were puff balls, some brown and others like little white pebbles. If you squeeze these puff balls, a fine dust of spores can emerge like a mist. You don’t want to breathe them in but at a distance they are mostly harmless.

We spotted some like ordinary field mushrooms, but when you scratched their light tan surface a bright yellow colour emerged. If you were to eat these yellow-staining mushrooms you would be sick and potentially seriously ill. Some contain very powerful toxins and can prove to be deadly if eaten. Unless you know exactly what fungus you have, don’t even think of eating them. It’s advisable to wash hands well after handling any kind of fungi.

Spores are the means by which fungi reproduce themselves. Most are tiny but they can be dry like powder, damp and sticky, dull or brightly coloured, plain or ornately decorated and sometimes quite smelly. The dry spores can easily be dispersed by even a gentle breeze, but the sticky ones often adhere to an unsuspecting passer-by such as a bird, rabbit, dog or human sock.

We gave the little ones extra points if they looked at the fungus but left it intact, even if they couldn’t resist giving one or two a poke. Their next discovery gained even more points because you had to look up: it was a bracket fungus growing on a dead branch. Some of these are snowy white, but others are yellow or bright orange, almost like traffic lights. Some have an almost velvety outer texture while others appear to be made of woody rings like the tree upon which they are growing.

On dead trees, bracket fungi have the role of recycling old dead wood. Some don’t even wait until the tree dies. They gain access to the old wood at the tree’s centre and begin the decay process while the tree is still living. The fruiting bodies of these fungi look like little shelves on the trunk of the tree and can persist for decades. On some trees, multiple brackets form a veritable stairway to heaven. If you have a large bracket fungus on a large old branch or tree, it’s a good idea to get arboricultural advice about the safety of the tree. 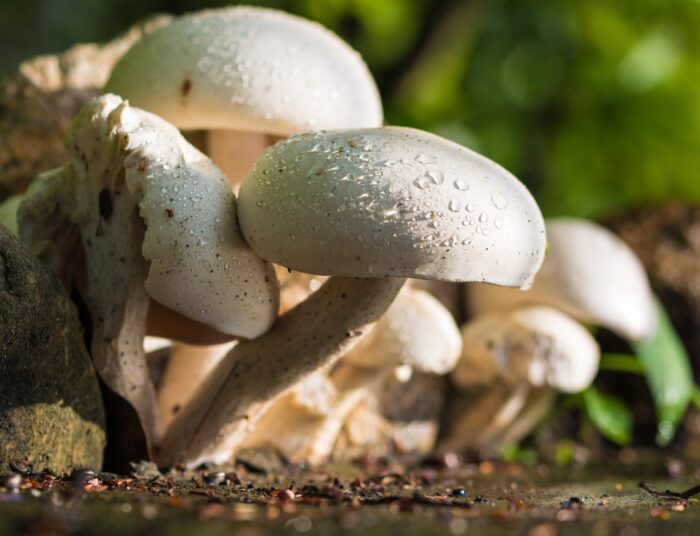 Our little posse of fungal hunters had travelled 100 metres into the park, but in the zigzag pattern of explorers, it had taken us an hour. A brown dried star-like structure was revealed as a dried puff ball, its spores well and truly blown and what was once a ball had peeled back as it dried into a near perfect star. In a section of mown grass, we come across the delicate mushrooms of a fairy ring. Excitement ensues.

Why is it a ring?
Where are the fairies?
Can you eat them?
Not the fairies, the mushrooms!
The fairies of course heard us coming and so they are hiding.
No, you can’t eat them because they might be poisonous and make you sick.

Fairy rings form into a circle because they came from a single starting point and expanded outward from the centre at more or less the same rate.

Is that a pebble? No it’s a fungus doing a brilliant impression of a pebble. We were camouflage experts now, and it couldn’t hide from us. Then a squeal. What is that? A soccer ball? No, old plastic. No, a dome. It’s a magnificent white basket fungus shaped like an intricate geodesic sphere. We left it for others to discover. With the mighty stick/sword/wand high in the air, we head for home.

Fungi are always there in our soils. Their fine thread structures, called hyphae, lie underfoot all year, but their fruiting bodies only appear under the right conditions. Many of these fungi entwine around the roots of specific plants and in many cases into the plant root cells themselves. The fungus offers water and nutrients to the plants and in return the plants give the fungus some of the carbohydrates they produce from photosynthesis. It’s a marvellously beneficial relationship.

We went a-hunting several more times, and the young ones never tired of the sport. Interacting closely with plants and fungi meets basic physical, mental and psychological needs hailing back to our early travel through natural ecosystems.

Finding and poring over plants and fungi engages all our senses – sight, hearing, smell, touch – and for experts only, taste. It’s no wonder all of us in the hunt feel the better for this purposeful forest bathing.

Spotting fungi above ground is a rare treat. If the weather gets too chilly, or if La Niña gives way to hot and dry El Niño, the fungi will vanish. But if we get a mild, wet winter, the fungal season can just roll on. That’s the thing about fungi, you can never be sure. They play by their own rules.

Gregory Moore, Doctor of Botany, The University of Melbourne