Home / News / Science and Research / Why do we want what we like? New evidence from bee brains offers clues

Why do we want what we like? New evidence from bee brains offers clues

What makes us want things we like? We know things that offer potential rewards, including food, sex, addictive drugs, and even certain artworks, can inspire desire in us – but why?

Neuroscience has solved part of the mystery, by identifying a system that drives wanting in mammals involving specific brain regions. Desire may help an animal to survive, for example by wanting to experience pleasure from nutritious food.

Now, as we discuss in a paper in Science, new research by Jingnan Huang at Fujian Agriculture and Forestry University and colleagues has found evidence of a similar wanting system in honeybees.

A common currency for driving wanting

What do we mean when we talk about “liking” and “wanting” things? Well, for neuroscientists, “liking” means the pleasurable feeling we get when we consume some reward. “Wanting”, on the other hand, means being motivated to reach the reward.

We know a bit about what happens in our brains and those of other mammals such as rodents when we want a reward. It involves dopamine, a kind of chemical called a neurotransmitter that enables communication between neurons in our brains.

To understand how the process works for non-mammals, Huang and colleagues looked at what happens in the brains of bees when presented with the prospect of a reward.

As the German scientist Karl von Frisch showed in the 1920s, honeybees use a symbolic dance language to communicate the location of rewarding flowers to hive-mates.

Other bees who observe this “waggle dance” are enticed to leave the hive and forage to collect nectar or other nutrition.

Huang and colleagues measured dopamine levels in the brains of the dancing and observing bees. They discovered that dopamine surges for performers and watchers at the beginning of the waggle dance, dropping off by the time the dance concludes.

Dopamine levels were higher when watching the dance than when the bees were actually feeding. These fluctuations show it is the expectation of wanting the sweet reward of nectar that chemically motivates the honeybees to forage.

A wanting system in a miniature brain

In spite of having fewer than a million neurons in their brains, honey bees demonstrate complex behaviours and are cable of solving problems like detecting flower scents and colours.

Other research shows bees can learn symbols to represent numerical quantities, or can learn to perform maths tasks like arithmetic.

Huang and colleagues also showed that providing higher dopamine concentrations to some test bees increased their motivation and improved their capacity to learn flower signals like scent. 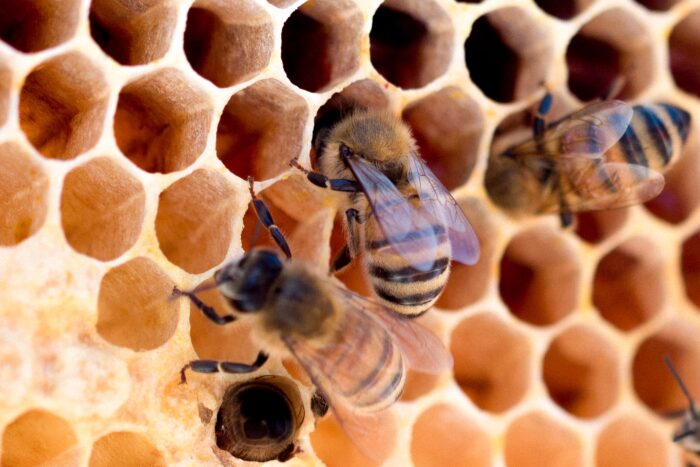 How to motivate pollinators

Honeybees and other bee species native to the different regions of the world are among the most important pollinators of many commercial and wild plant species. By carrying pollen from one flower to another of the same species, bees ensure cross pollination which often results in higher number of seeds and fruit size.

Therefore bees are of important economic value by pollinating valuable crops such as almonds, citrus and various species of vegetables.

Queen bees can modulate dopamine pathways of young bees to capture their attention and motivate them to complete specific tasks. A better understanding of the effects of dopamine on the wanting system of honeybees may open the door to a more efficient and sustainable use of honeybees for many tasks including agricultural and neuroscience.

The new research on honeybees also supports an idea raised by the famed English naturalist Charles Darwin 150 years ago, in his book The Expression of Emotions in Man and Animals. He proposed that liking and disliking things was so helpful to animals that it might form the basis for wanting mechanisms in humans and other animals.

This idea, alongside the presence of a wanting system in honeybees suggests that a precursor of the mammalian wanting system may have developed very early in the evolutionary history of animals. It may also provide a biologically plausible explanation for why we want what we like.