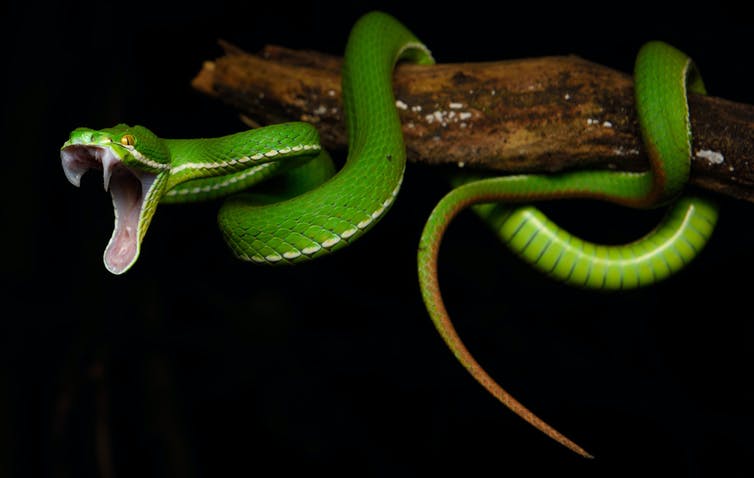 Home / News / Science and Research / How venomous snakes got their fangs

Venomous snakes inject a cocktail of toxins using venom fangs — specialised teeth with grooves or canals running through them to guide the venom into a bite wound. Uniquely among animals, grooved and tubular teeth have evolved many times in snakes.

Our new research, published today in Proceedings of the Royal Society B, reveals this happened via a modification of tooth structures that probably served to help anchor snakes’ teeth in their sockets. In certain species, these structures evolved into grooves running the length of the tooth, which served as a handy conduit to deliver venom.

Of the almost 4,000 species of snakes, about 600 are considered “medically significant”, meaning they can deliver a bite that would require hospital treatment, but many more have small fangs and are only mildly venomous. The appearance of mild venoms is thought to predate the appearance of venom fangs in snakes.

The repeating history of fangs

By looking at snakes’ evolutionary tree, we can assume the most recent common ancestor of all fanged snakes was probably fangless. This seems much more likely than the alternative: that fangs were acquired once and then lost independently in dozens of different snake lineages.

So how did snakes repeatedly evolve syringe-like teeth from the simpler cone-shaped teeth of their ancestors?

To address this question, we took a closer look at snake teeth and how they develop. We examined 19 species of snakes, including both venomous and non-venomous species and one early fossil form. We used both traditional methods, such as studying slides under a microscope, and cutting-edge microCT scans and biomechanical modelling.

We found that nearly all snakes — whether venomous or not — have teeth that are tightly infolded at their base, and look wrinkly in cross-section (the wrinkles in the red part of the diagram below).

These folds or wrinkles occur in a tooth layer called dentine, and are known as “plicidentine”, from the Latin word “plica”, meaning “fold”. Plicidentine has been found in many extinct animals and a handful of living fish and lizard species. The function of these folds is not clear, but one theory is they make teeth less likely to break or bend during biting.

However, when we tested this idea using computer simulations on digital tooth models with and without these folds we found that this is not the case.

Snakes replace their teeth throughout their life, rather like sharks, and their teeth do not have deep sockets. So we think the folds could improve the initial attachment of new teeth to shallow sockets by providing a larger area for attachment.

Regardless of the original function of folded snake teeth, what is really interesting is that in venomous snakes, one of those folds is much larger than the others and extends up the tooth to produce a groove: the venom groove.

These long, single grooves have occasionally been found in the teeth of other species, such as the venomous Gila monster, which has plicidentine folds and associated grooves in all of its teeth. Importantly, the grooved teeth of the Gila monster can occur in the mouth away from the venom glands, implying a disconnection between the two. We also found that some venomous snakes occasionally have grooves on teeth other than the venom fangs; such teeth are not connected to the venom glands.

So, grooved teeth can occur all over the mouth, even away from the venom glands and their ducts, and we found a clear connection between the presence of plicidentine and venom grooves. This led us to hypothesise that the original condition for venomous snakes could have been that of randomly expressing grooves on their teeth simply as a result of enlarged plicidentine folds, independently of venom glands.

Next, we looked at how the grooved fangs and venom glands of venomous snakes could have evolved together to become an efficient structure for delivering venom.

We think that when a grooved tooth appeared near the discharge orifice of the venom gland, natural selection likely favoured its increase in size and efficiency, as that tooth was more effective at injecting venom.

This refining evolutionary process would eventually produce the large, syringe-like fangs we see today in snakes such as cobras and vipers, where the edges of the groove meet to form a needle-like tubular structure.

This discovery shows how a simple ancestral feature, such as plicidentine (wrinkles on the tooth base likely related to tooth attachment), can be modified and re-purposed for a completely new function (a groove for venom injection). And this could help explain why snakes, uniquely among all animals, have evolved venomous fangs so many times.