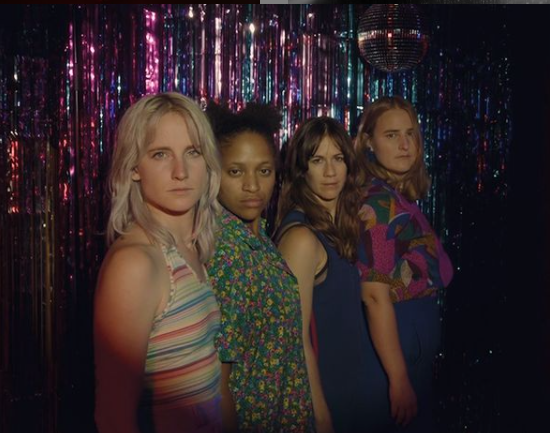 New Music hitting our playlist this week includes The Buoys, Teenage Joans, Kyler Fisher, RAYE, renforshort and so much more!

In spot number one this week, we have The Buoys with Bad Habit.

The Buoys are the sweet and savoury all-female Sydney outfit-making noise around Australia. The band explores themes of uncertainty, disappointment, curiosity, and determination writing mostly about everyday experiences.

Teenage Joans is an Australian indie rock duo from Adelaide, South Australia, which formed in 2018. The duo consists of vocalist and drummer Tahlia Borg and vocalist and guitarist Cahli Blakers.

The duo rose to prominence with their debut single “By the Way”. Their second single, “Three Leaf Clover”, was released in March 2020 and became the winning song of Triple J’s 2020 Unearthed High competition. Their debut extended play, Taste of Me, was released on 28 May 2021.

The duo has been the recipient of multiple awards, including South Australian Live Act of the Year at the 2019 National Live Music Awards.

In spot number three, we have Kyler Fisher with Wildfire.

Kyler Fisher is an American actor, YouTube sensation, and now aspiring country singer.  He is the patriarch of the popular family channel ‘The Fishfam’ which he runs alongside his wife Madison.

Also an actor, he has appeared in a number of big-screen projects, such as ‘Juarez 2045,’ ‘Wild Horses’ and ‘Water’ among others. Known for his comedic videos and personal vlogs, Fisher is currently focusing on his YouTube career.

Today, he has achieved much recognition on the platform, having millions of fans and followers on his family channel. A father of a pair of twins, he is extremely responsible when it comes to his wife and kids. Just like many other family YouTubers, he effectively manages both his professional and personal life simultaneously.

RAYE is a British singer and songwriter from London. In 2016, she had her breakthrough by featuring on the singles; “By Your Side” by Jonas Blue and “You Don’t Know Me” by Jax Jones, the latter peaking at number three on the UK Singles Chart and both being certified platinum or higher by the BPI.

Raye was short-listed for the BBC Music Sound of award for 2017 and was named in third place. Her debut mini-album, Euphoric Sad Songs was released in November 2020 and spawned the UK top-10 single “Secrets” with Regard.

In 2021, she was the co-lead artist on the single “Bed” with musicians Joel Corry and David Guetta. In July 2021, Raye parted ways with her record label Polydor Records.

Jess Glynne is a British singer and songwriter. After signing with Atlantic Records, she rose to prominence in 2014 as a featured artist on the singles “Rather Be” by Clean Bandit and “My Love” by Route 94, both of which reached number one in the UK. She has been considered one of the “Most Influential People Under 30” by Forbes magazine in 2019.

Zac Samuel is a British dance music producer and a remixer DJ. He is based in Brighton, UK.

Finally, in spot number five, we have renforshort with Fuck, I Luv My Friends.

Lauren Isenberg, known as renforshort is a Canadian singer and songwriter from Toronto. Debuting independently in 2019 with the singles “Waves” and “Mind Games”, Isenberg released her debut extended play, the Teenage Angst EP, in March 2020.