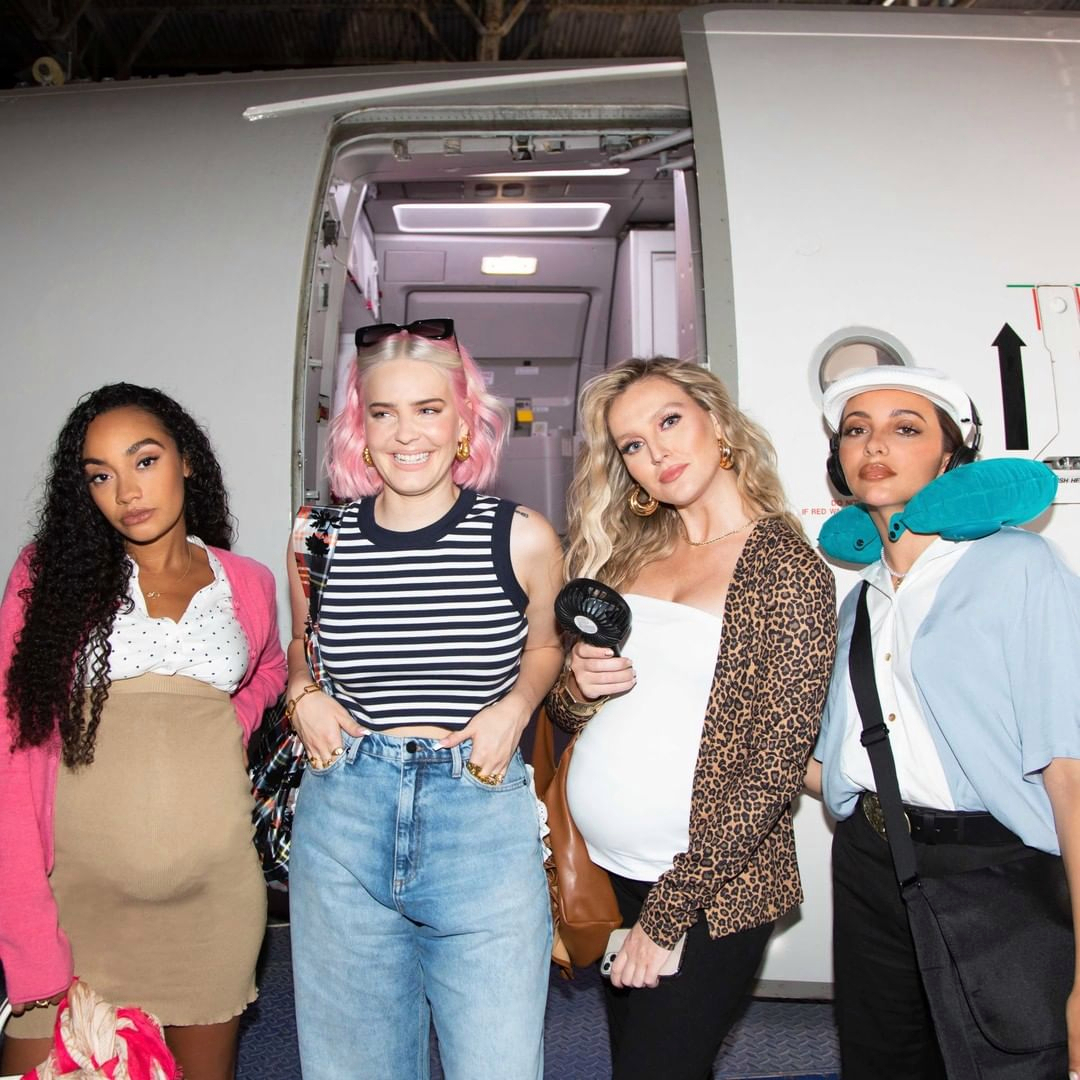 It is that time again, New Music Monday.  This week, our playlist has a range of music from your favorite artists and some you may never have heard of.

In spot number one this week, we have Anne- Marie and Little Mix with Kiss My (uh oh).

Anne-Marie Rose Nicholson is an English singer. She has attained charting singles on the UK Singles Chart, including Clean Bandit’s “Rockabye”, featuring Sean Paul, which peaked at number one, as well as “Alarm”, “Ciao Adios”, “Friends”, “2002” and “Don’t Play”. Her debut studio album, Speak Your Mind, was released on 27 April 2018 and peaked at number three on the UK Albums Chart. She was nominated for four awards at the 2019 Brit Awards, including Best British Female Solo Artist. In 2015, she signed a record deal with Asylum (a sub-label of Atlantic Records) and began releasing her work through the label. Since 2021, she has been a coach on the tenth series of The Voice UK. Anne-Marie’s second studio album, Therapy was released on 23 July 2021.

Little Mix is a British girl group, consisting of Jade Thirlwall, Perrie Edwards, and Leigh-Anne Pinnock; former member Jesy Nelson departed the group in December 2020. The group rose to fame in 2011 by becoming the first group to win the UK version of The X Factor and signed with Simon Cowell’s record label, Syco Music. The group’s sound combines pop, R&B, and dance music, and they have been acclaimed for their vocals and harmonies. The group has been recognized for using its platform and songs to advocate for female empowerment, body positivity, anti-racism, and LGBT rights. Little Mix has sold over 60 million records worldwide, making them one of the best-selling girl groups of all time.

At the 2021 Brit Awards, they became the first girl group in its 43-year history to win the award for Best British Group. They have also won two other Brit Awards, winning British Single in 2017 with “Shout Out to My Ex”, and British Video of the Year in 2019 for “Woman Like Me”, which made them the first girl group to win the award since the Spice Girls in 1997. Their other accolades include six MTV Europe Music Awards, two Teen Choice Awards, one iHeartRadio Music Award, and six Global Awards. In 2021, they were awarded the Women of the Year Gamechangers in Music at the Glamour Awards. The group appeared on Debrett’s 2017 list of the most influential people in the UK, Forbes’ 30 Under 30 list in 2018, and on the Sunday Times Young Rich List for four years, from 2017 to 2021.

She rose to prominence as a member of the girl group Fifth Harmony, formed on The X Factor USA in 2012, signing a joint record deal with Syco Music and Epic Records. While in Fifth Harmony, Cabello began to establish herself as a solo artist with the release of the collaborations “I Know What You Did Last Summer” with Shawn Mendes, and “Bad Things” with Machine Gun Kelly, the latter reaching number four on the US Billboard Hot 100. After leaving the group in late 2016, Cabello released several other collaborations, including “Hey Ma” with Pitbull and J Balvin for The Fate of the Furious soundtrack (2017), and her debut solo single “Crying in the Club”.

Cabello’s debut studio album, Camila (2018), reached number one on the Billboard 200 chart. The Latin music-influenced pop album was critically well-received and received a Platinum certification by the Recording Industry Association of America (RIAA). Its lead single “Havana” topped the charts in several countries including the US and UK, and the follow-up single “Never Be the Same” reached the top ten in multiple countries. Cabello’s 2019 duet with Mendes, “Señorita”, became her second single to top the Billboard Hot 100. Her second studio album, Romance (2019), peaked at number three on the Billboard 200 chart and number one in Canada. Cabello is set to star in an upcoming film adaptation of Cinderella (2021), for Sony Pictures.

In spot number three we have Hayden James and Crooked Colours with Rather Be With You.

Hayden James is an Australian DJ, songwriter, and record producer from Sydney, Australia. He is signed to the Future Classic label. He released his first single “Permission to Love” in June 2013 with remixes from label mates Touch Sensitive and Charles Murdoch.

His debut EP, Hayden James was released on 30 August 2013. Since then, James has supported Disclosure and Odesza on their US and Australian tours. He has also played at major Australian music festivals Splendour in the Grass and Groovin The Moo. His single “Something About You” was released in December 2014 and was certified gold in Australia and has been streamed over 68 million times. In June 2016, James released “Just a Lover” which received an ARIA nomination for Best Dance Release and was followed by a national tour with producer Dena Amy as support. In 2016-17, James toured across Europe and North America and co-wrote a number of tracks for Katy Perry’s Witness album, as well as working on his own debut studio album. “Numb” featuring Grace was released in October 2017. In May 2019, James announced he would release his debut studio album Between Us on 14 June 2019.

Crooked Colours are an Australian alternative dance group from Perth, Western Australia, who formed in 2013. The band consists of Phil Slabber, Leon Debaughn and Liam Merrett-Park. Their album “Langata” peaked at number 1 on the Australian Dance Album ARIA Charts. The band started off as house party DJs, later developing into a three-piece electronic live band.  They have performed at many festivals and events including Groovin The Moo, Spilt Milk, Beyond The Valley, Falls Festival, Bonnaroo, and Splendour In The Grass.

Khalid Donnel Robinson is an American singer and songwriter. His most known hits are “Talk”, “Better”, “Love Lies” and “Young Dumb & Broke”; and his most known collaborations are with Benny Blanco and Halsey on “Eastside”, with Ed Sheeran on “Beautiful People”, with Marshmello on “Silence” and with Logic and Alessia Cara on “1-800-273-8255” single. He is signed to Right Hand Music Group and RCA Records.

In March 2017, Khalid released his debut studio album, American Teen. The album spawned the US top-20 singles “Location” and “Young Dumb & Broke”, and was later certified double platinum by the Recording Industry Association of America (RIAA). Later that year he was featured on Logic’s US top-ten single, “1-800-273-8255”, with Alessia Cara, which earned him a Grammy Award for Song of the Year nomination.

The following year Khalid released the number-one pop songs, “Love Lies” with Normani and “Eastside” with Benny Blanco and Halsey, both of which tied the record for longest-charting songs on the Mainstream Top 40 chart and reached the top-10 on the Billboard Hot 100.

In September 2018, Khalid released the number-one Rhythmic song, “Better”, as the lead single from his top-10 EP, Suncity. In April 2019, he released his second studio album, Free Spirit, which debuted atop the Billboard 200 chart. The lead single “Talk”, peaked at No. 3 in the US, and earned him a Grammy Award for Record of the Year nomination.

In 2019, Khalid was named one of Time magazine’s 100 Most Influential People.

Finally, in spot number five, we have The Kid LAROI, Polo G, and Stunna Gambino with NOT SOBER.

Charlton Kenneth Jeffrey Howard, professionally known as The Kid LAROI., is an Australian rapper and singer-songwriter. He is from one of the many Indigenous Australian Nations, the Kamilaroi people from which he derived his artist name “Laroi”. Born in Waterloo, New South Wales, he originally gained recognition from his association and friendship with late rapper Juice Wrld, who mentored him while he was on tour in Australia. Laroi gained a local following before joining a partnership agreement with Lil Bibby’s Grade A Productions and Columbia Records.

Laroi gained international attention with his song “Let Her Go”, and attained further popularity with his song “Go” featuring Juice Wrld, which peaked at number 52 on the Billboard Hot 100. His debut mixtape F*ck Love (2020) peaked at number one on the Australian ARIA Charts, making him the youngest Australian solo artist ever to reach the top, and also reached number one on the US Billboard 200. Additionally, Laroi’s singles “Without You” and “Stay” reached the top ten of the Billboard Hot 100.

Taurus Tremani Bartlett, known professionally as Polo G, is an American rapper. In 2018, he rose to prominence with the singles “Finer Things” and “Pop Out” (featuring Lil Tjay). In 2019, he released his debut album Die a Legend, which received generally positive reviews and peaked at number six on the US Billboard 200 and was certified platinum by the RIAA.

Bartlett’s second studio album, The Goat (2020), peaked at number two on the Billboard 200 and charted ten singles on the Billboard Hot 100 chart.  In 2021, he released the single “Rapstar”, which debuted at number one on the Hot 100 and became his first number one hit on the Hot 100 and first solo top-ten single. The song served as the lead single for his third studio album Hall of Fame (2021), which became Bartlett’s first chart-topping album.

Stunna Gambino is an American rapper that used SoundCloud to help get his songs to the general public in 2017. He first garnered recognition in 2018, with the release of his single titled “Still the Same”, which featured Leeky Bandz. He has since become a household name with singles such as “Demons”, “Rivals” and “Heartless”. His Spotify account has gained upwards of 2.8 million monthly listeners. In July 2021, he made mainstream headlines when he was featured on The Kid Laroi’s song “Not Sober”.