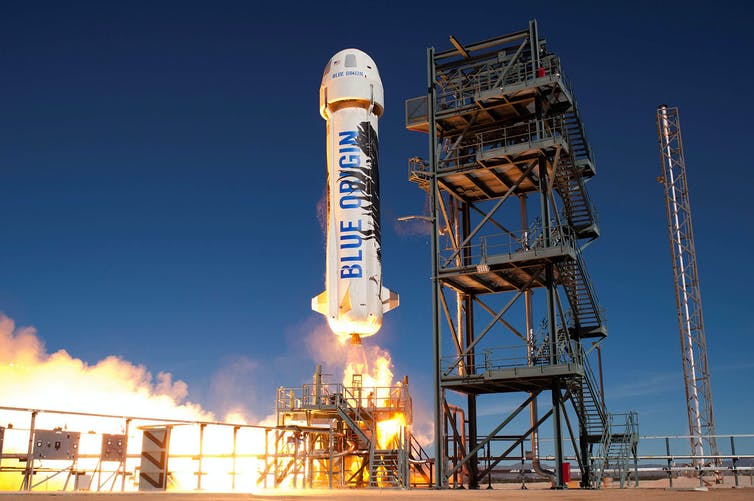 Home / News / News / Branson vs Bezos: as the billionaires get ready to blast into space, who’s got the better plan?

Branson vs Bezos: as the billionaires get ready to blast into space, who’s got the better plan?

Chris James, The University of Queensland

Over the next fortnight, Blue Origin founder Jeff Bezos and Virgin Galactic founder Richard Branson will take off into space, because they can, on spaceships designed by their respective companies.

It’s a big moment for the private space industry. But the question comes to mind: who has the smarter plan?

On May 5 Blue Origin, owned by former Amazon CEO Jeff Bezos, announced it would fly its first crew of astronauts into space on July 20 — the Apollo 11 Moon landing’s 52nd anniversary.

After 15 successful test flights, this will be the first crewed flight for Blue Origin’s New Shepard spaceship. One seat will be occupied by an undisclosed winner of a charity auction, who reportedly paid US$28 million for the privilege. Two more seats will be taken up by Bezos and his brother Mark.

A fourth seat will go to Wally Funk. The 82-year-old pilot was a promising candidate in the 1960s Mercury 13 women’s astronaut training programme, but wasn’t able to go to space because of her gender.

It wasn’t long after Bezos announced his plans that Sir Richard Branson also joined in, setting a launch date of July 11 — nine days before Bezos’s departure.

Branson will travel as part of a six person crew on Virgin Galactic spaceplane VSS Unity. It will be the fourth time the VSS Unity, the specific SpaceShipTwo spacecraft, has been flown to space, but the first with a full crew.

Both flights will be short, and based on different definitions of where “space” begins.

Bezos’s Blue Origin has chosen to define this as the internationally recognised Kármán line at 100 kilometres altitude. The peak of the New Shepard’s trajectory will be just past this limit.

Meanwhile, Virgin Galactic has chosen the US Air Force’s definition of space at about 80km altitude. Their SpaceShipTwo generally reaches a peak altitude of around 90km during flight.

Blue Origin’s New Shepard is a fully autonomous rocket (with no pilots) which takes off almost fully vertically from its launch site in remote West Texas.

It is powered by a BE-3 liquid-fuelled rocket motor, which burns for around two and a half minutes until the spacecraft reaches 55km of altitude, at a speed of 900 metres per second. With its almost vertical trajectory, this is enough altitude and momentum to reach space.

The whole flight will only last ten minutes, with astronauts experiencing weightlessness near the peak altitude, before their capsule re-enters the atmosphere and drifts back down to Earth. Parachutes will help with deceleration.

Virgin Galactic’s SpaceShipTwo spaceplane will be carried up to 15km altitude by a carrier aircraft, the WhiteKnightTwo. At this point it will launch itself into space, starting above the thick lower atmosphere.

SpaceShipTwo will detach from WhiteKnightTwo and start its hybrid rocket motor engine which burns for a minute, giving the spaceplane enough momentum to reach its 90km peak altitude.

Similar to the New Shepard, passengers will experience several minutes of weightlessness before re-entering the atmosphere.

Due to its low speed upon re-entry, SpaceShipTwo will perform a “feathered re-entry”, where it will rotate its wings up and use them to keep stable, like a shuttlecock, as it falls down to 15km altitude.

It will then once again become a spaceplane and glide back to the ground under the control of pilots, ready for re-use.

A rocket versus a spaceplane

There are several differences and similarities in the companies’ approaches.

Both will have short flights, allowing them to make use of suborbital launch trajectories. This means they will achieve the right altitude to reach space, but won’t go into orbit. This approach requires much less fuel than an orbital flight.

Suborbital trajectories also make re-entry significantly slower, so the heavy heat shielding that would be required when returning from orbit won’t be needed. Also, both aim to re-use their spaceships to lower the costs of operation over time.

Beyond that, however, their approaches are quite different.

Blue Origin’s New Shepard is essentially a large “sounding rocket” These are small research rockets which perform suborbital hops so science experiments can be performed during brief trips to space.

It also uses a liquid rocket motor which, while harder to design, is generally safer since it can be throttled during operation (and even shut off if required).

New Shepard, which has performed 15 successful uncrewed test flights, is overall a simple spacecraft. This will likely make it cheaper and safer in the long run.

In contrast, Virgin Galactic’s SpaceShipTwo is much more advanced. It is launched mid-air and is rocket-powered — an approach that hasn’t been properly explored since NASA and the US Air Force’s X-15 program in the 1960s.

For a successful flight, SpaceShipTwo must be launched while being carried by a carrier aircraft, must ignite its rocket motor in the air, stow its wings for re-entry and then un-stow them again to glide home. This complicated procedure has already come unstuck multiple times.

A recent SpaceShipTwo flight was aborted due to a computer malfunction after its rocket motor ignited. It landed safely but didn’t reach space.

And in 2014, the accidental activation of the feathered re-entry system during ascent to space led to destruction of the first SpaceShipTwo model, the VSS Enterprise, tragically killing the co-pilot.

While the costs of a seat on both spaceships will be eye watering, only Virgin Atlantic have announced an official price tag: US$250,000 per seat on a SpaceShipTwo flight. It’s expected Blue Origin’s New Shepard will be priced similarly.

The simplicity of Blue Origin’s system means it will probably be better equipped to reduce costs over time. But simplicity may also be its downfall. Meanwhile, SpaceShipTwo is a more complex spacecraft with pilots. This could prove more attractive to customers.