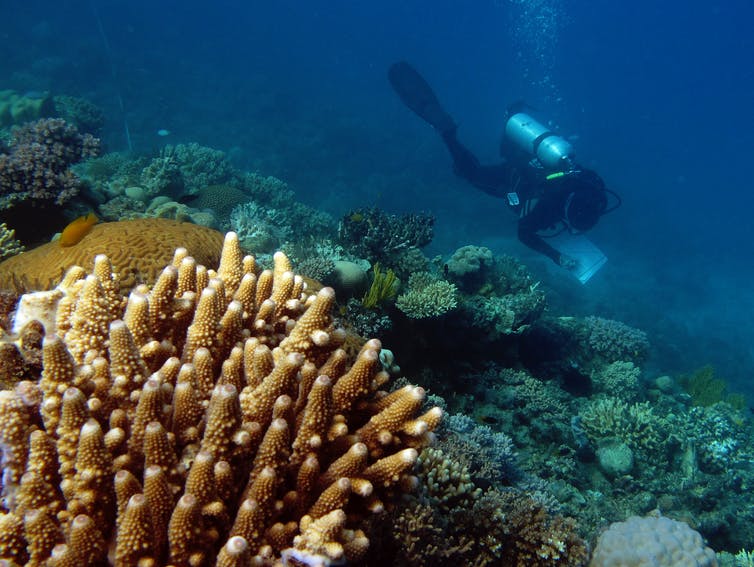 Home / News / News / Almost 60 coral species around Lizard Island are ‘missing’ – and a Great Barrier Reef Extinction Crisis Could Be Next !

Almost 60 coral species around Lizard Island are ‘missing’ – and a Great Barrier Reef Extinction Crisis Could Be Next !

The federal government has opposed a recommendation by a United Nations body that the Great Barrier Reef be listed as “in danger”. But there’s no doubt the natural wonder is in dire trouble. In new research, my colleagues and I provide fresh insight into the plight of many coral species.

Worsening climate change, and subsequent marine heatwaves, have led to mass coral deaths on tropical reefs. However, there are few estimates of how reduced overall coral cover is linked to declines in particular coral species.

Our research examined 44 years of coral distribution records around Lizard Island, at the northern end of the Great Barrier Reef. We found 16% of coral species have not been seen for many years and are at risk of either local extinction, or disappearing from parts of their local range.

The Lizard Island reef system is 270 kilometres north of Cairns. It has suffered major disturbances over the past four decades: repeated outbreaks of crown-of-thorns seastars, category 4 cyclones in 2014 and 2015, and coral bleaching events in 2016, 2017 and 2020.

Our research focused on “hermatypic” corals around Lizard Island. These corals deposit calcium carbonate and form the hard framework of the reef.

We undertook hard coral biodiversity surveys four times between 2011 and 2020, across 14 sites. We combined the results with published and photographic species records from 1976 to 2020.

The “missing” coral species include:

Each coral species on the reef has numerous vital functions. It might provide habitat or food to other reef species, or biochemicals which may benefit human health. One thing is clear: every coral species matters.

As human impacts and climate threats mount, there is growing concern about the resilience of coral biodiversity. Our research suggests such concerns are well-founded at Lizard Island.

Coral reef communities are dynamic, and so detecting species loss can be difficult. Our research found around Lizard Island, the diversity of coral species fluctuated over the past decade. Significant declines were recorded from 2011 to 2017, but diversity recovered somewhat in the three following years.

Local extinctions often happen incrementally and can therefore be “invisible”. To detect them, and to account for natural variability in coral communities, long-term biodiversity monitoring across multiple locations and time frames is needed.

In most locations however, data on the distribution and abundance of all coral species in a community is lacking. This means it can be hard to assess changes, and to understand the damage that climate change and other human-caused stressors are having on each species.

Only with this extra information can scientists conclusively say if the level of local extinction risk at Lizard Island indicates a risk that coral species may become extinct elsewhere – across the Great Barrier Reef and beyond.

Read more:
Is Australia really doing enough for the Great Barrier Reef? Why criticisms of UNESCO’s ‘in danger’ recommendation don’t stack up