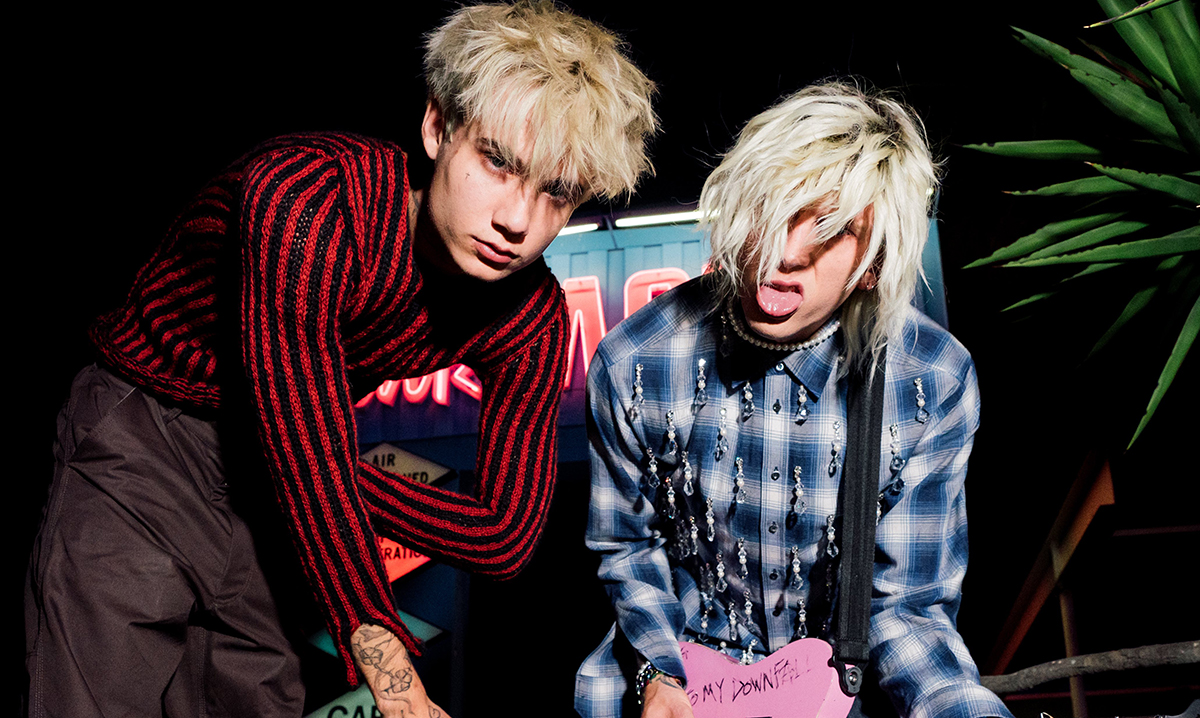 New Music hitting our playlist this week from Jxdn, Luke Hemmings, Ed Sheeran, Taylor Swift, Regard and so much more!

In spot number one we have Jxdn and Machine Gun Kelly with WANNA BE.

Jaden Isaiah Hossler, known professionally as Jxdn, is an American singer, songwriter and TikTok personality from Chattanooga, Tennessee. Hossler rose to prominence on the video-sharing app TikTok in 2019 before beginning a music career in early 2020 with the release of his debut single “Comatose”.

Colson Baker, known professionally as Machine Gun Kelly, is an American rapper, singer, songwriter and actor. He is noted for his compositional blending of contemporary and alternative hip hop with rock. Machine Gun Kelly released four mixtapes between 2007 and 2010 before signing with Bad Boy Records. He released his debut studio album, Lace Up, in 2012, which peaked at number four on the US Billboard 200 and contained his breakout single “Wild Boy” (featuring Waka Flocka Flame). His second and third albums, General Admission (2015) and Bloom (2017) achieved similar commercial success; the latter included the single “Bad Things” (with Camila Cabello), which peaked at number 4 on the Billboard Hot 100. His fourth album, Hotel Diablo (2019), saw an exploration of rap-rock.

Machine Gun Kelly released his fifth album, Tickets to My Downfall, in 2020; it marked a complete departure from hip hop and entry into pop-punk. It debuted at number one on the Billboard 200, the only rock album to do so that year, and contained the single “My Ex’s Best Friend”, which reached number 20 on the Hot 100.

Machine Gun Kelly had his first starring role in the romantic drama Beyond the Lights (2014), and since appeared in the techno-thriller Nerve (2016), the horror Bird Box (2018), the comedy Big Time Adolescence and portrayed Tommy Lee in the biopic The Dirt (both 2019).

Ed Sheeran is an English singer, songwriter, record producer, musician, actor, and businessman. After first recording music in 2004, he began gaining attention through YouTube. In early 2011, Sheeran independently released the extended play, No. 5 Collaborations Project. He signed with Asylum Records the same year.  He has sold more than 150 million records worldwide, making him one of the world’s best-selling music artists. He has 84.5 million RIAA-certified units in the US, and two of his albums are on the list of the best-selling albums in UK chart history: × at number 20, and ÷ at number 34. In December 2019, the Official Charts Company named him the artist of the decade, with the most combined success in the UK album and singles charts in the 2010s. Globally, Spotify named him the second most-streamed artist of the decade. Beginning in March 2017, his ÷ Tour became the highest-grossing of all time in August 2019. An alumnus of the National Youth Theatre in London, Sheeran’s acting roles include appearing in the 2019 film Yesterday.

In spot number 3 we have, Luke Hemmings with Starting Line.

Luke Hemmings is an Australian singer-songwriter and musician, known for being the lead vocalist of the Australian pop-rock band 5 Seconds of Summer. Since 2014, 5 Seconds of Summer have sold more than 10 million albums, sold over 2 million concert tickets worldwide, and the band’s songs streams surpass 7 billion, making them one of the most successful Australian musical exports in history. He has only recently announced that he has been working on his solo album set for release by October this year and Starting Line is the first single from it.

Spot number four goes to Regard, Troye Sivan, KC Lights and Tate McRae with You.

Dardan Aliu, professionally known as Regard, is a Kosovo-Albanian DJ. His 2019 single “Ride It” is a remix of Jay Sean’s 2008 song, which became a viral sensation on video-sharing app TikTok and has since achieved international success.

Troye Sivan is an Australian singer-songwriter, actor and YouTuber. After gaining popularity as a singer on YouTube and in Australian talent competitions, Sivan signed with EMI Australia in 2013 and released his third extended play, TRXYE (2014), which peaked at number five on the U.S. Billboard 200. Its lead single, “Happy Little Pill”, reached number ten on Australian music charts. In 2015, he released his fourth extended play Wild followed by his debut studio album Blue Neighbourhood, whose lead single “Youth” became Sivan’s first single to enter the top 40 of the Billboard Hot 100 chart, peaking at number 23. His second studio album Bloom (2018) reached number three in Australia and number four on the Billboard 200 chart. Its lead single, “My My My!”, became Sivan’s second number-one single on the Billboard Dance Club Songs chart. “Take Yourself Home” served as the first single from his EP In a Dream (2020).

KC Lights is a Scottish DJ, musician and music producer. He has stacked his growing audience with original records coming out on Hervé’s ‘Cheap Thrills’ imprint. “Lose It All” gained support from house music heavyweights Rudimental, MK and Danny Howard, while his next record “No No No” became the definitive Ibiza Anthem of 2015. “No No No” hit #3 on the BBC R1 Dance Charts, Top 10 on Shazam UK Dance, and was also included on Annie Mac’s annual AMP compilation.

Tate McRae is a Canadian singer, songwriter, and dancer. At the age of thirteen, she gained prominence as the first Canadian finalist on the American reality TV show So You Think You Can Dance. McRae caught the attention of RCA Records in 2019 after her original song “One Day” (2017) went viral on YouTube, subsequently releasing her debut EP, All the Things I Never Said (2020). McRae soon gained wider recognition after her song “You Broke Me First” became an international hit. In 2020, McRae was the youngest musician featured on Forbes‘ 30 Under 30 list. Since then, she has been releasing singles left and right, as well as teaming up with many different artists for collaborations.

Lastly, in spot number five, we have Big Red Machine and Taylor Swift with Renegade.

Big Red Machine is an American indie-folk band that began as a collaboration between musicians Aaron Dessner and Justin Vernon. In June 2021, the band announced their second album, How Long Do You Think It’s Gonna Last? scheduled to be released on August 27, 2021. In the week of the announcement, they released the singles “Latter Days” (featuring Mitchell), “The Ghost of Cincinnati”, and “Renegade” (featuring Swift).

Taylor Swift is an American singer-songwriter. With sales of over 200 million records worldwide, Swift is one of the best-selling music artists.

Her accolades include 11 Grammy Awards (including three Album of the Year wins), an Emmy Award, two Brit Awards, 11 MTV Video Music Awards (including two Video of the Year wins), 12 Country Music Association Awards, 25 Billboard Music Awards (the most wins by a woman), 32 American Music Awards (the most wins by an artist) and 35 Guinness World Records. She ranked eighth on Billboard‘s Greatest of All Time Artists Chart (2019) and was listed on Rolling Stone‘s 100 Greatest Songwriters of All Time (2015).

Swift has been included in various power rankings, such as Time‘s annual list of the 100 most influential people in the world (2010, 2015 and 2019) and Forbes Celebrity 100 (placing first in 2016 and 2019). She was named Woman of the Decade (the 2010s) by Billboard and Artist of the Decade (2010s) by the American Music Awards. Swift has also been recognized for her philanthropic efforts and advocacy of women’s and artists’ rights.