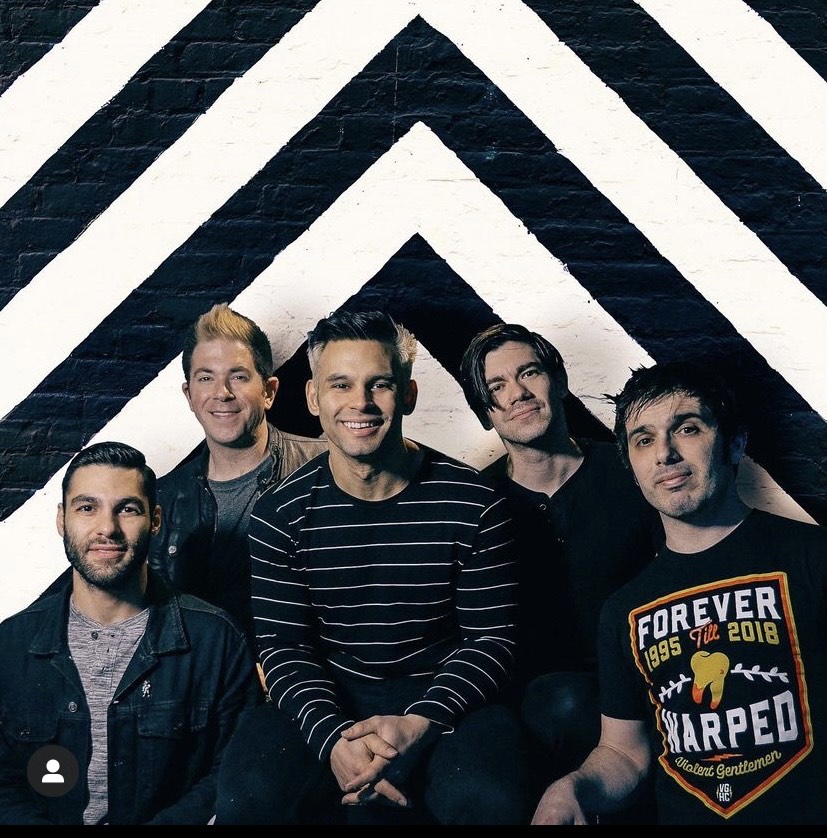 It is that time again, New Music Monday. This week, our playlist has a range of new music from your favourite artists and some you may have never heard of. There was so much good music it was so hard to narrow it down, so the playlist is a bit more jam-packed than normal!

In spot number one this week, we have Patent Pending and Awesten Knight with Wobble.

Patent Pending is an American rock band, formed in Mount Sinai, New York. in 2001. The band is notable for its upbeat demeanour, diverse song subjects, close relationship with its fans, and energetic live shows. Since the group’s formation, Patent Pending has released three full-length albums, ten extended plays, and ten singles to date.

Awsten Constantine Knight is the lead singer and rhythm guitarist in Waterparks. The band was first founded in 2011 and has since released three EPs and three albums (their 4th album, “Greatest Hits (2021)”, which is being released on May 21st). Awsten is known to make his fans lose their minds by leaking music and dyeing his hair a different colour for every new album.

Spot number two goes to Anitta with Girl From Rio.

Larissa de Macedo Machado better known by her stage name Anitta, is a Brazilian singer, songwriter, actress, and dancer. Due to the success of the song “Meiga e Abusada” released in 2012, she signed a contract with Warner Music Brazil the following year.

Anitta rose to national fame in 2013 after releasing the single “Show das Poderosas”. Its music video has been viewed over 150 million times on YouTube.  In July of the same year, she released her debut studio album which received a triple gold record certificate and platinum certification by ABPD. The album hit the mark of 170,000 copies sold, is also released in Portugal. Ritmo Perfeito (2014), her second studio album, sold 45,000 copies after a month of its release. On the same day, she also released her first live album, Meu Lugar.  In November 2014, she performed at the Latin Grammy Award. In 2015, she released her third studio album entitled Bang, which was certified platinum and produced the singles “Deixa Ele Sofrer”, “Bang”, “Essa Mina é Louca” and “Cravo e Canela”.

In 2013, Anitta was the singer who remained at the top of iTunes in Brazil for the longest time. She was elected by the Associação Paulista de Críticos de Arte (APCA) as the revelation of the year in music in 2013. She is a five-time winner of the Best Brazilian Act on the MTV Europe Music Awards and was the first Brazilian artist to win the Best Latin American Act award.[13] In 2017, she was ranked as one of the most influential celebrities in social media according to Billboard.

In spot number three we have YUNG BLUD with cotton candy.

Dominic Richard Harrison, known professionally as Yungblud, is an English singer, songwriter, and actor. In 2018, he released his debut EP, Yungblud, followed by the full-length album 21st Century Liability shortly after. The following year, Yungblud released another EP, The Underrated Youth. His second album, Weird!, was released in late 2020 and peaked atop the UK Albums Chart, and reached number 75 on the US Billboard 200.

Spot number four goes to a throwback band, and that is The Summer Set with Lightning in a Bottle.

The Summer Set was an American rock band from Scottsdale, Arizona, United States. The band consisted of lead vocalist Brian Logan Dales, guitarists Josh Montgomery and John Gomez, bass guitarist Stephen Gomez, and percussionist Jess Bowen. The Summer Set was signed to The Militia Group in 2008, Razor & Tie from 2009–2011, and to Fearless Records from 2012–2017. The Summer Set released four full-length studio albums: Love Like This (2009), Everything’s Fine (2011), Legendary (2013), and Stories for Monday (2016). The band toured with numerous musical acts, including The Cab, We Are The In Crowd, Mayday Parade, Sleeping with Sirens, All Time Low, The Downtown Fiction, and Action Item.

On October 17, 2017, the band announced that they were going on an indefinite hiatus.

In spot number five, we have P!nk with All I Know So Far.

Alecia Beth Moore, known professionally as Pink (stylized as P!nk), is an American singer and songwriter. She was originally a member of the girl group Choice. Noted for her distinctive raspy voice and acrobatic stage presence, Pink has sold over 90 million records worldwide, making her one of the world’s best-selling music artists. Her career accolades include three Grammy Awards, two Brit Awards, a Daytime Emmy Award and seven MTV Video Music Awards, including the Michael Jackson Video Vanguard Award. In 2009, Billboard named Pink the Pop Songs Artist of the Decade. Pink was also the second most-played female solo artist in the United Kingdom during the 2000s decade, behind only Madonna. VH1 ranked her at number ten on their list of the 100 Greatest Women in Music, while Billboard awarded her the Woman of the Year award in 2013. At the 63rd annual BMI Pop Awards, she received the BMI President’s Award for “her outstanding achievement in songwriting and global impact on pop culture and the entertainment industry.”

Stand Atlantic are an Australian pop-punk band from Sydney, formed in 2012. The band consists of vocalist/guitarist Bonnie Fraser, guitarist David Potter, bassist Miki Rich, and drummer Jonno Panichi. They gained prominence in the Australian music scene with the release of their demo EPs, Catalyst (2013) and A Place Apart (2015). The band signed with Rude Records in 2017 and released the single “Coffee at Midnight”, which landed them positive reviews. They released an EP, Sidewinder, in September 2017. Their debut album, Skinny Dipping, was released in October 2018. Their second album, Pink Elephant, was released on 7 August 2020.

Joseph Edward Mulherin, better known by his stage name Nothing, Nowhere,  is an American singer, rapper, and songwriter.

While the music composed by Mulherin is entirely written and produced by him, he maintains a group of musicians who consist of associates that perform with him for live shows also under the nothing, nowhere. name. The band has toured as a supporting act for Grandson, Real Friends, Tiny Moving Parts, Thrice and La Dispute on multiple tours.

Spot number seven goes to Loser with On the Edge.

After premiering via triple j Good Nights last week, Loser revealed their new single On the Edge. This has come after the release of some of the band’s most reactive releases to date in “All I Need”, and “Up Side Down ” recently. They also officially launched Restless Noise Studios (coined after the band’s 2018 EP- to the public in Jan, after the brother Tim and Will Maxwell took to their parents’ garage to build a studio from scratch during the lockdown. Restless noise studios will find Loser recoding other artists while continuing to double down on self-recording their upcoming new album, due for release in 2021.

In spot number eight, we have Coldplay with Higher Power.

Coldplay is a British rock band formed in London in 1996.  They have sold more than 100 million records worldwide, making them one of the world’s best-selling music artists. Coldplay has won numerous awards throughout their career, including nine Brit Awards, seven MTV Video Music Awards, eight MTV Europe Music Awards and seven Grammy Awards from 35 nominations. The band’s first three albums — Parachutes (2000), A Rush of Blood to the Head (2002), and X&Y (2005)—are among the best-selling albums in UK chart history. In December 2009, Rolling Stone readers voted the group the fourth-best artist of the 2000s, and Q magazine included the group in their Artists of the Century list.

OneRepublic is an American pop rock band formed in Colorado Springs, Colorado in  2002. In late 2003, after OneRepublic played shows throughout the Los Angeles area, a number of record labels approached the band with interest, but OneRepublic ultimately signed with Velvet Hammer, an imprint of Columbia Records.

OneRepublic’s third album, Native (2013), became the band’s first top ten albums on the Billboard 200, and the highest-charting album to date, charting at number four. The lead single, “If I Lose Myself” charted within the top ten in several countries, while the album’s third single, “Counting Stars”, became the band’s most successful single in recent years, obtaining top-five placements in Australia, Canada, Germany, Ireland, New Zealand, the U.S. and the UK. This marks their highest charting single in the United Kingdom to date. It has also peaked at number 2 on the US Billboard Hot 100, matching their highest peak of “Apologize” in 2007.

Lastly, we have Jonas Brothers with Rollercoaster.

The Jonas Brothers are an American band. Formed in 2005, they gained popularity from their appearances on the Disney Channel television network. They consist of three brothers: Kevin Jonas, Joe Jonas, and Nick Jonas. In 2008, the group was nominated for the Best New Artist award at the 51st Grammy Awards and won the award for Breakthrough Artist at the American Music Awards. As of May 2009, before the release of Lines, Vines and Trying Times, they had sold over eight million albums worldwide. After a hiatus during 2010 and 2011 to pursue solo projects, the group reconciled in 2012 to record a new album, which was cancelled following their break-up on October 29, 2013.

They have sold over 17 million albums worldwide as of 2013. Six years following their split, the group reunited with the release of “Sucker” on March 1, 2019. The song became the 34th song in history to debut at number one on the Billboard Hot 100 and became the Jonas Brothers’ first number-one single on the chart. Their fifth studio album, Happiness Begins, was released on June 7, 2019, topping the US Billboard 200.