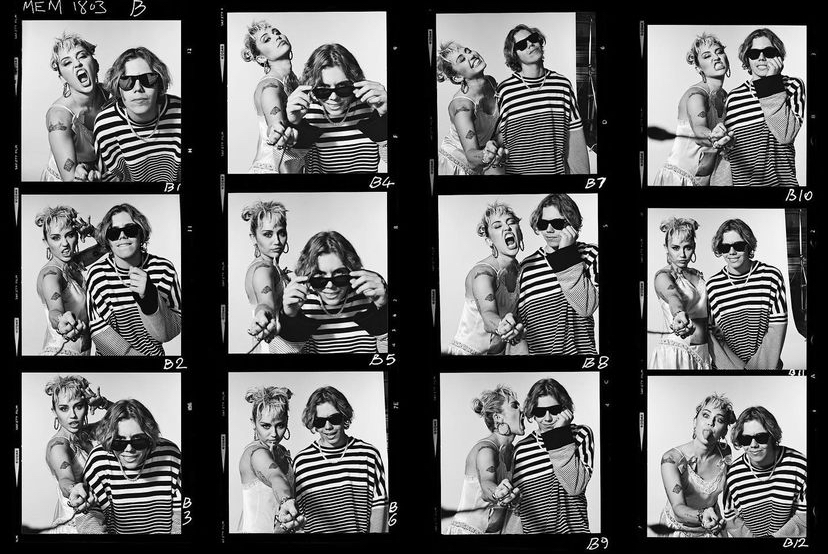 In spot number one this week, we have The Kid Laroi and Miley Cyrus with a remix version of WITHOUT YOU.

Charlton Kenneth Jeffrey Howard, professionally known as The Kid Laroi, is an Australian singer, rapper, songwriter and record producer.  He was born in Waterloo and originally gained recognition from his association and friendship with late rapper Juice Wrld, who mentored him while he was on tour in Australia. Laroi gained a local following before signing to Lil Bibby’s Grade A Productions. He became known outside Australia with his song “Let Her Go”, and gained further popularity with his song “Go” featuring Juice Wrld, which peaked at number 52 on the Billboard Hot 100. His debut mixtape F*ck Love (2020) peaked at number one on the Australian ARIA Charts, making him the youngest Australian solo artist ever to reach the top. It also reached number three on the US Billboard 200.

Born as Destiny Hope Cyrus, but referred to as Miley Ray Cyrus, is an American singer, songwriter, and actress. Noted for her distinctive raspy voice, her music incorporates elements of varied styles and genres, including pop, country pop, hip hop, experimental, and rock. Cyrus has attained the most US Billboard 200 top-five albums in the 21st century by a female artist, with a total of thirteen entries. Her personal life, public image, and performances have often sparked controversy and received widespread media coverage. She is just 1 of 3 daughters of country music singer Billy Ray Cyrus, who emerged as a teen idol while portraying the title character of the Disney Channel television series Hannah Montana (2006–2011).

Spot number two goes to Julia Michales with Little Did I Know.

Julia Michaels is an American singer and songwriter. She began her career writing for other artists. Following her success as a writer, she released her debut single with Republic Records in 2017, “Issues”, which peaked at number 11 on the Billboard Hot 100 in the United States and was certified quintuple-platinum by the Recording Industry Association of America (RIAA). Her major-label debut extended play, Nervous System (2017), peaked at number 48 on the Billboard 200 chart in the United States. She has since toured alongside Maroon 5, Keith Urban, and Niall Horan and has appeared on the UK top 20 hits “If the World Was Ending” with JP Saxe and “I Miss You” with Clean Bandit. As a songwriter, Michaels has written songs for artists including Selena Gomez, Demi Lovato, Fifth Harmony, Shawn Mendes, Britney Spears, Justin Bieber, Hailee Steinfeld, and Gwen Stefani. She has earned two Billboard Hot 100 number one songs with Bieber’s “Sorry” and Gomez’s “Lose You to Love Me”. Michaels has also received three Grammy Award nominations, two of which were for Song of the Year and the third being for Best New Artist, as well as nominations from MTV Video Music Awards, Billboard Music Awards, and American Music Awards.

In spot number three we have Amy Shark with Worst Day of My Life.
Amy Louise Billings, known professionally as Amy Shark, is an Australian indie pop singer-songwriter-guitarist and producer from the Gold Coast, Queensland. From 2008 to 2012, her early solo material was released and performed under the name Amy Cushway. Her 2016 single “Adore” peaked at number 3 on the ARIA Singles Chart and was also listed at number 2 on the Triple J Hottest 100, 2016. Her album Love Monster (July 2018) debuted at number 1 on the ARIA Albums Chart. Shark has won 8 ARIA Music Awards from 22 nominations, including winning Best Pop Release three times: in 2017 for her extended play, Night Thinker, 2018 for Love Monster and 2020 for “Everybody Rise”.  Even more recently, dropping her latest album Cry Forever on 30 April 2021.
Spot number four goes to Julia Stone with Sixty Summers.
Julia Stone is an Australian folk singer-songwriter and multi-instrumentalist. She is the sister half of Angus & Julia Stone and is also a solo musician. Her debut solo album, The Memory Machine, was released in September 2010. Her second solo album, By the Horns, was released in May 2012 and peaked at No. 11 on the ARIA Albums Chart. Julia has released her third solo album called Sixty Summers on 30 April 2021, just this year.

Finally, in spot number five, we have DJ Khaled; Post Malone; Da Baby; Megan Thee Stallion; and Lil baby with I Did It.

Khaled first gained prominence as a radio host in the 1990s on the radio station 99 Jamz and translated his popularity by working with Terror Squad as a DJ for their live performances. After gaining production credits on the group’s material, Khaled released his debut studio album Listennn… the Album in 2006, which earned gold certification. He followed it with We the Best (2007), which contained the top 20 single “I’m So Hood”. His subsequent two releases — We Global (2008) and Victory (2010) — were released after he founded the record label We the Best Music Group. Both albums charted in the top ten on the US Billboard 200, with the latter containing the single “All I Do Is Win”, which was eventually certified triple platinum.

His fifth studio album We the Best Forever (2011) also saw similar commercial success and helped bring Khaled to international prominence, as it featured the song “I’m on One”, which was his first top ten hits. His sixth and seventh albums, Kiss the Ring (2012) and Suffering from Success (2013), charted in the top ten on the Billboard 200, and his eighth studio album, I Changed a Lot (2015), peaked at number 12.In 2015 and 2016, Khaled gained worldwide attention as a media personality, due to his activity on social media. This foresaw the release of his ninth studio album Major Key (2016), which gained critical and commercial success; it debuted atop the Billboard 200, was certified gold, and received a Grammy nomination for Best Rap Album.

He released his tenth studio album, Grateful, in 2017, which contained the singles “I’m the One” and “Wild Thoughts”, which charted at number one and number two on the Billboard Hot 100, respectively. The album debuted at number one on the Billboard 200 and was also certified platinum. His eleventh album, Father of Asahd, was released in 2019; it peaked at number two, and the song “Higher” won Best Rap/Sung Performance at the 62nd Annual Grammy Awards, Khaled’s first Grammy award win. His eponymous twelfth album was released in 2021.

Outside of music, Khaled has gained success as a writer, with his book The Keys featuring on the New York Times Best Seller list. He has also featured as an actor, appearing in Spies in Disguise (2019) and Bad Boys for Life (2020).

Austin Richard Post known professionally as Post Malone, is an American rapper, singer, songwriter, record producer, and actor. Known for his tattoos, introspective songwriting, and laconic vocal style, Malone has gained acclaim for blending a range of genres including hip hop, R&B, pop, trap, rap-rock, and cloud rap. He first attained recognition in 2015 following the release of his debut single “White Iverson”. He subsequently signed a recording contract with Republic Records. His stage name is derived from his last name and from a rap name generator.

Jonathan Lyndale Kirk known professionally as DaBaby (formerly known as Baby Jesus), is an American rapper. After releasing several mixtapes between 2014 and 2018, DaBaby rose to mainstream prominence in 2019. His debut studio album Baby on Baby (2019) peaked at number seven on the Billboard 200, while his second studio album, Kirk (2019), debuted at number one. The former album featured the Billboard Hot 100 hit single “Suge”, while the latter featured “Intro”, and “Bop”. His third studio album, Blame It on Baby (2020), became his second consecutive number-one album in the US. The album included his highest-charting song, “Rockstar” (featuring Roddy Ricch), which spent seven non-consecutive weeks at number one on the Billboard Hot 100.

Megan Jovon Ruth Pete known professionally as Megan Thee Stallion is an American rapper, singer, and songwriter. Originally from Houston, Texas, she first garnered attention when videos of her freestyling became popular on social media platforms such as Instagram. Megan Thee Stallion signed to 300 Entertainment in 2018 where she released the mixtape Fever (2019), the extended play Suga (2020), and her debut studio album, Good News (2020); all of which peaked in the top 10 of the Billboard 200. Her single “Savage (Remix)” featuring Beyoncé, and her feature on Cardi B’s single “WAP”, both released in 2020, each reached number one on the US Billboard Hot 100 chart, with the latter providing Megan with her first number one in several other countries. Throughout her career, Megan Thee Stallion has received several accolades, including two BET Awards, five BET Hip Hop Awards, two MTV Video Music Awards, a Billboard Women in Music Award, and three Grammy Awards. At the 63rd Annual Grammy Awards, she became the first female hip hop artist to win Best New Artist since Lauryn Hill in 1999. In 2020, Time magazine named her one of the 100 most influential people in the world on their annual list.

Dominique Armani Jones professionally referred to as Lil Baby is an American rapper, singer, and songwriter from Atlanta, Georgia. He rose to mainstream fame in 2017 following the release of his mixtape Perfect Timing, becoming one of the most prominent figures in the trap music scene to date. Lil Baby’s debut studio album Harder Than Ever (2018) was certified RIAA Platinum and included the song “Yes Indeed” with Drake, which peaked at six on the Billboard Hot 100. He went on to release two more mixtapes in 2018, Drip Harder and Street Gossip, the former containing his most popular song “Drip Too Hard”, which peaked at number four on the Billboard Hot 100, and the latter peaking at number two on the US Billboard 200. Lil Baby’s second studio album, My Turn (2020), peaked at number one on the Billboard 200 and is certified three times platinum by the RIAA. The song “We Paid” (featuring 42 Dugg) charted at number ten on the Hot 100. In June 2020, he released the single “The Bigger Picture”, which peaked at number three on the Hot 100, becoming the highest-charting song as a lead artist of his career.