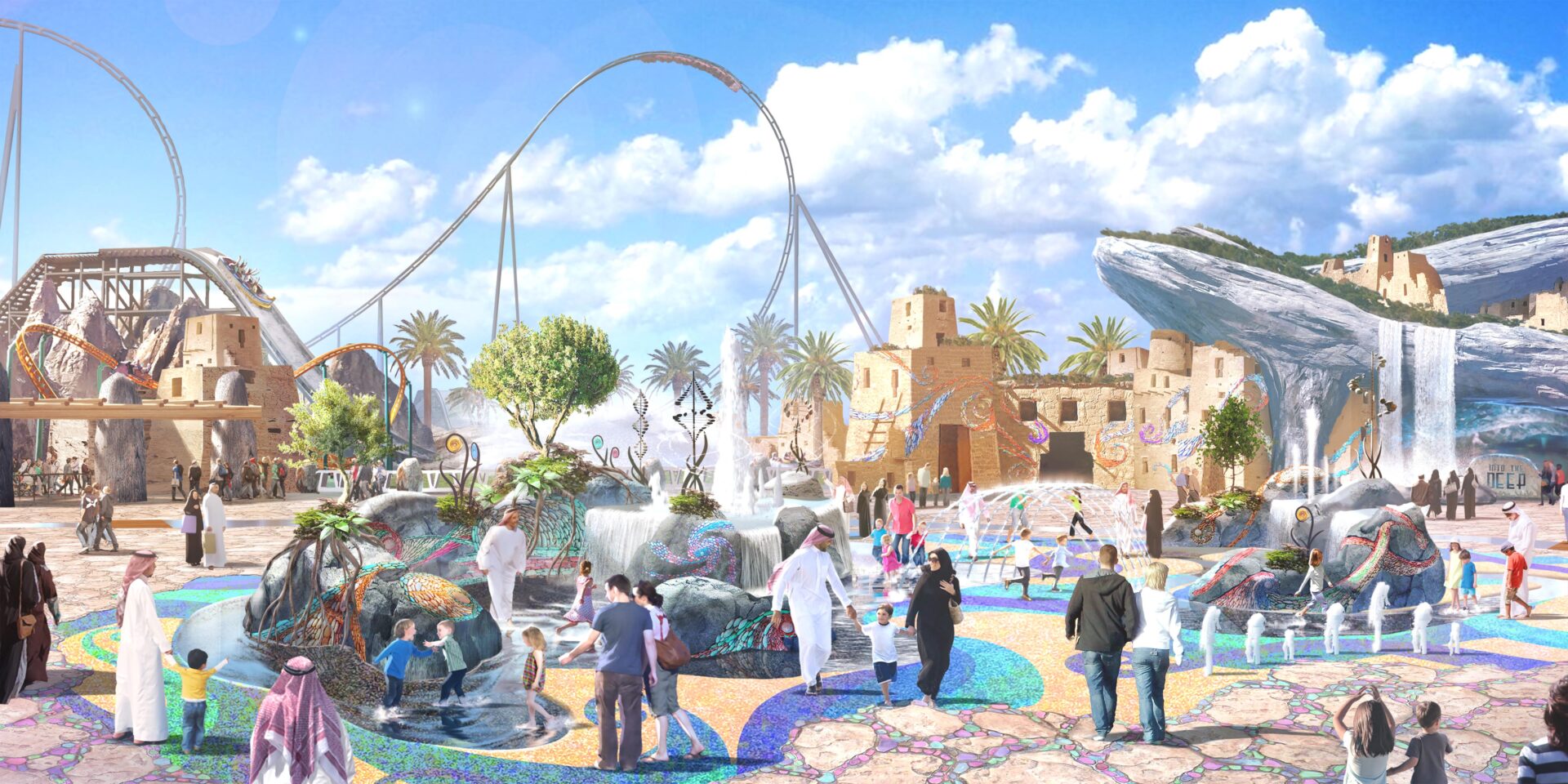 Home / News / Culture / Saudi Arabia are building a new theme park and it's going to be NUTS!!!

Saudi Arabia are building a new theme park and it’s going to be NUTS!!!

If you’re like me, when you visit an amusement park, you’re looking for the biggest and best rides out there. The taller, faster and loopier the roller coaster, the more times I’ll ride it. And there are some insane roller coasters out there.

But now, thrillseekers might have a new paradise destination to travel to – Saudi Arabia. American amusement park chain Six Flags have revealed details about their new park project in the Saudi capital of Riyadh, and it looks like it’s going to smash records all over the place.

So, make sure your stomach is settled… because here’s a sneak preview of what Six Flags Qiddiya is teasing to open with in 2023. 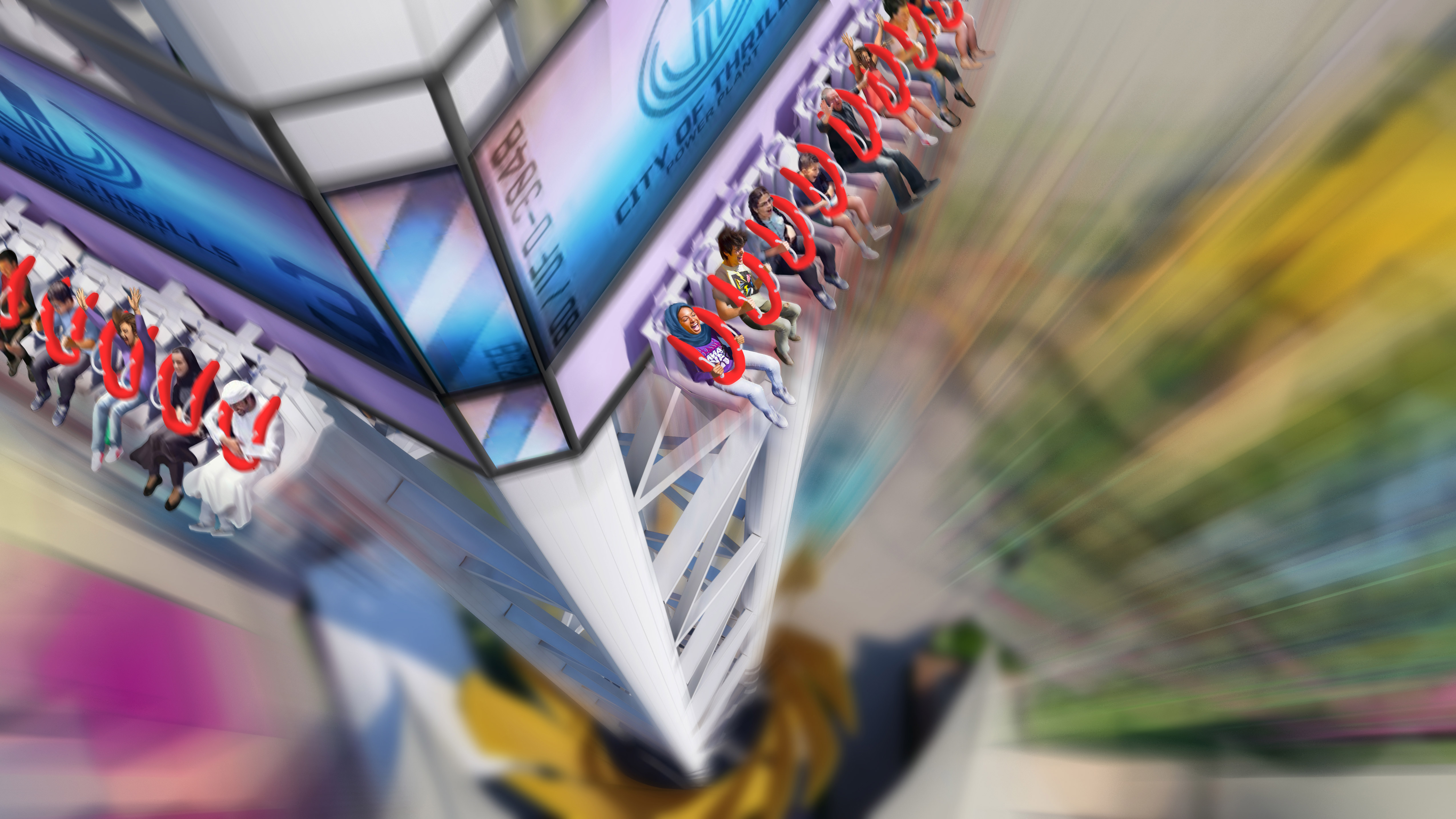 Drop towers are one of the more divisive rides at theme parks. Even some true thrillseekers are very frightened by the idea of being lifted high in the sky only to plummet towards the ground. But Six Flags Qiddiya is going to shatter records by taking these rides to the next level.

SFQ’s drop tower will stand as the tallest in the world, breaking the current record of Zumanjaro: Drop of Doom at Six Flags Great Adventure in New Jersey, which stands at 126 metres tall. Zumanjaro features a freefall that lasts more than 5 seconds, reaching a resounding top speed of 140 km/h.

Not only that, but this concept art shows a model designed by American manufacturer S&S, who are known for their drop towers that not only drop riders at the speed of gravity but launch them back upwards with powerful compressed-air launches as well. This one will not be for the faint of heart.

A Formula One circuit 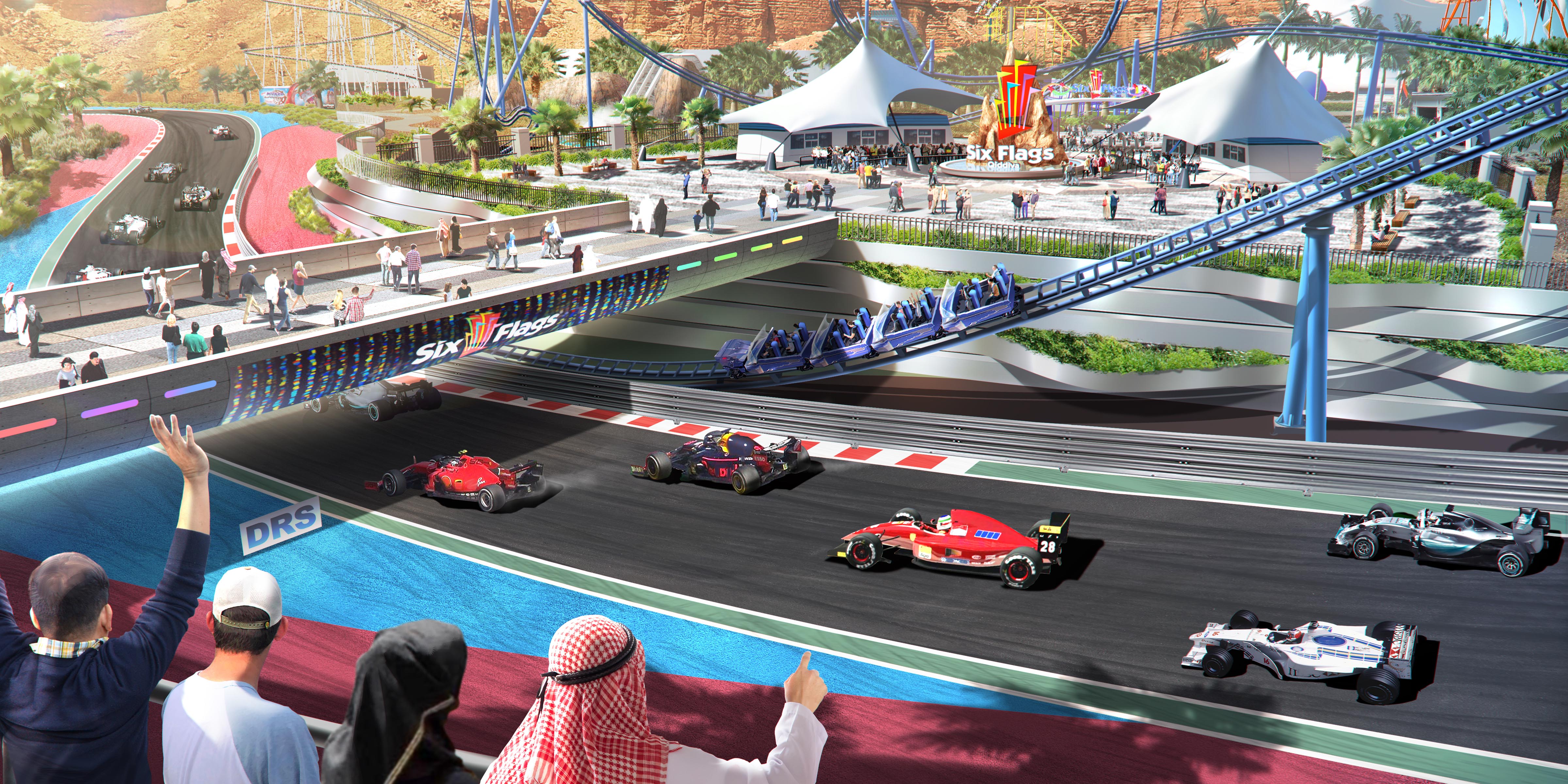 Formula One announced this year that Saudi Arabia will host a grand prix for the first time in its history. This year, the race will be held on the streets of the city of Jeddah, but Qiddiya announced plans in August 2019 to construct a brand new circuit to host the event – right alongside the site of the future Six Flags park.

The circuit has already been designed by Formula One driver Alexander Wurz to go in the new entertainment megaplex suburb of Qiddiya, and Six Flags are set to benefit. Can you imagine racing by in a roller coaster while Formula One cars roar beneath you? Now that would be some experience. 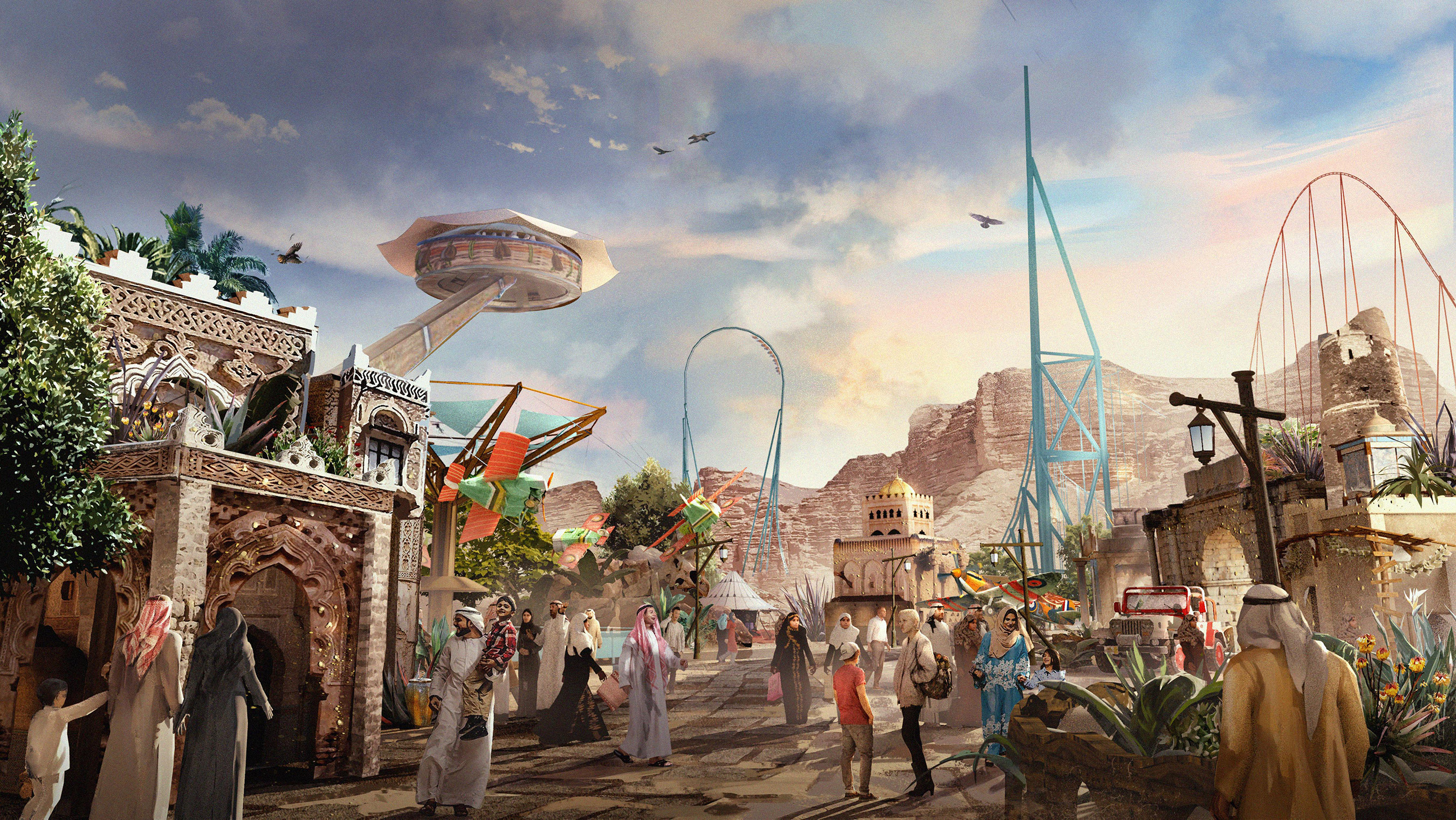 This concept art for one of Six Flags Qiddiya’s multiple themed “worlds” shows the spike and top hat of a huge launched roller coaster – potentially similar to the ones being manufactured by American company Premier Rides.

Premier have gained popularity in the amusement park world in the past few years for their smooth, forceful and extreme launched roller coasters, such as the upcoming Ice Breaker at SeaWorld Orlando. And if this concept art is anything to go by, this would be one of Premier’s tallest, fastest and best constructions to date. If Premier are behind this ride, expect a smooth ride with a fast launch and extremely forceful elements.

This artwork seems a little more conceptual, so it’s rather hard to be sure, but there is speculation that this ride – which looks like it might be called the Iron Rattler – could be a tilt coaster. This is a model that only exists in one other place in the world.

The only other tilt coaster on Earth is designed by Vekoma and operates at a park called Lihpao Discovery World in Taiwan. It isn’t certain why other amusement parks never got behind the brilliant concept, but there are theories that fears of maintenance issues and unreliability were the cause of concern. However, this tilt coaster, called Gravity Max, opened in 2002, so Vekoma and other manufacturers have had plenty of time to perfect their models and iron out any potential maintenance issues by now.

If this is indeed a tilt coaster, we can expect a one-of-a-kind roller coaster. You simply won’t find anything like this anywhere else in the world. 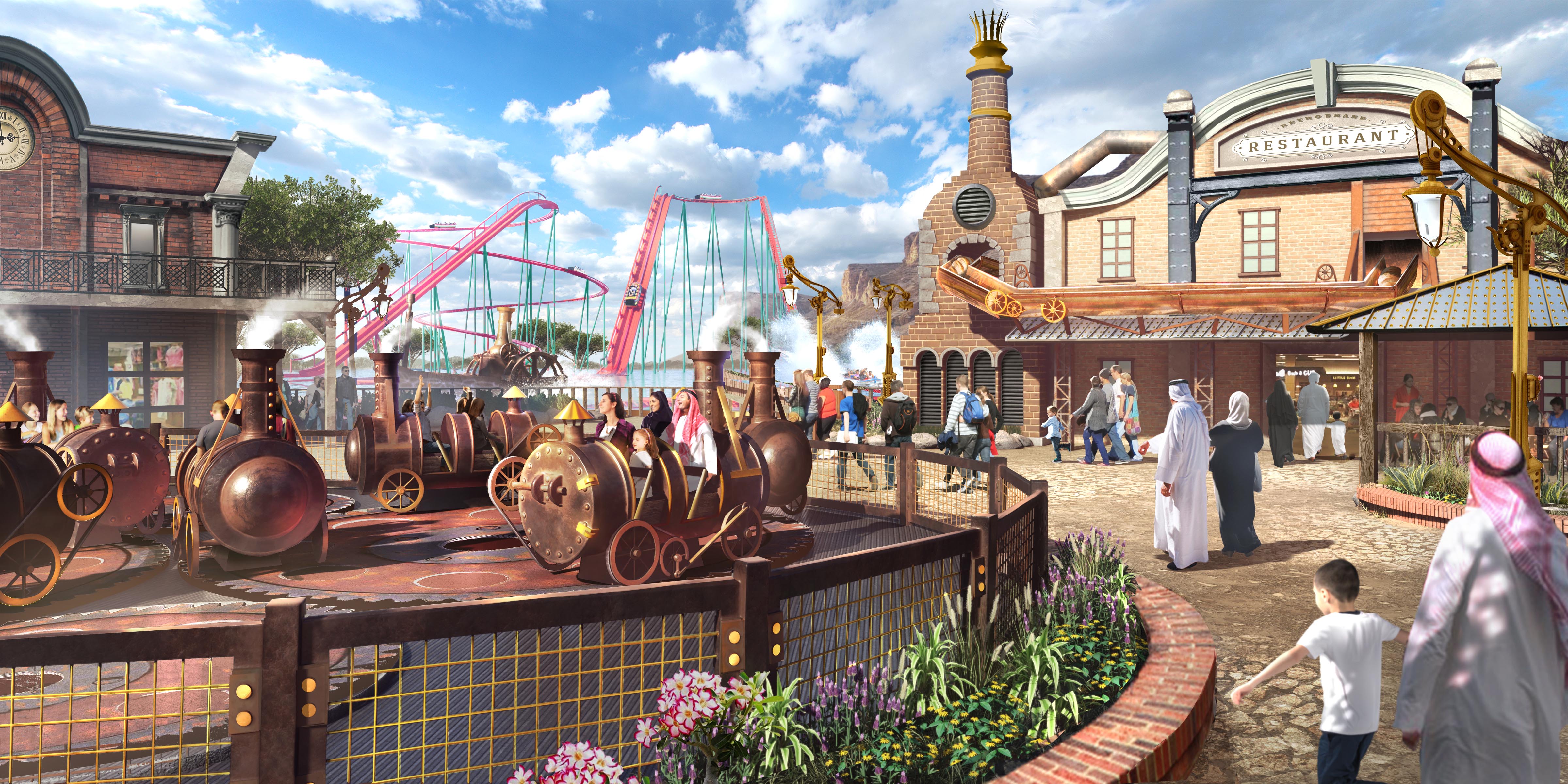 One of the roller coaster manufacturers making waves at the moment is German manufacturer Mack Rides. You know them well if you’re a roller coaster lover in Australia – they’re responsible for some of our biggest and best coasters, including the DC Rivals Hypercoaster at Movie World, an upcoming ride at Dreamworld and the Storm Coaster at Sea World.

The model in this concept art looks like it might be the same model as the latter – Mack’s famous water coaster, a hybrid between a roller coaster and a flume ride. Few experiences are quite like riding a roller coaster only to splashdown and be drenched by the water below, and this model looks like a much longer and more extended version of Mack’s already-existing water coasters.

A Mack water coaster would be a fantastic addition for those Saudi desert summers!

But most importantly… the world’s TALLEST, LONGEST and FASTEST roller coaster!

In 2019, Six Flags announced that their new park in Qiddiya will feature a record-smashing roller coaster called Falcon’s Flight, which will not only topple all of the records – it will make it look easy.

All we have so far is an (admittedly very unrealistic) rendering on Six Flags’ official website, but officials have made some pretty big claims about this thing already. And if true, it would be an absolute monster!

While coaster enthusiasts and critics have scoffed at the idea, particularly given this rather poorly-made animation, we’ve now received some big news that has made many turn their heads and start to think this thing may actually happen: there is now a manufacturer attached, and they’re one of the few who might be up to the task.

Apparently, Swiss manufacturer Intamin are set to take on the challenge of building this stomach-churning behemoth, and if anyone can do it, it’s Intamin. They are responsible for some of the world’s most earth-shattering and record-breaking roller coasters that push the boundaries of what a thrill ride can do – including both the aforementioned Kingda Ka and Formula Rossa.

If the news is true, and Intamin have taken on designing the project, then there is genuine reason to believe it can be done. And if Intamin build it, you can guarantee this thing will be the biggest, the fastest, and the best roller coaster on the planet.

Now that you’ve seen the conjecture and some theories about what Six Flags Qiddiya will have to offer… how’s your stomach? Getting jelly legs?

I can guarantee I’ll be booking my tickets if the park is anything like these early concepts.

Construction has been underway since 2018, and the park is scheduled to open in 2023.