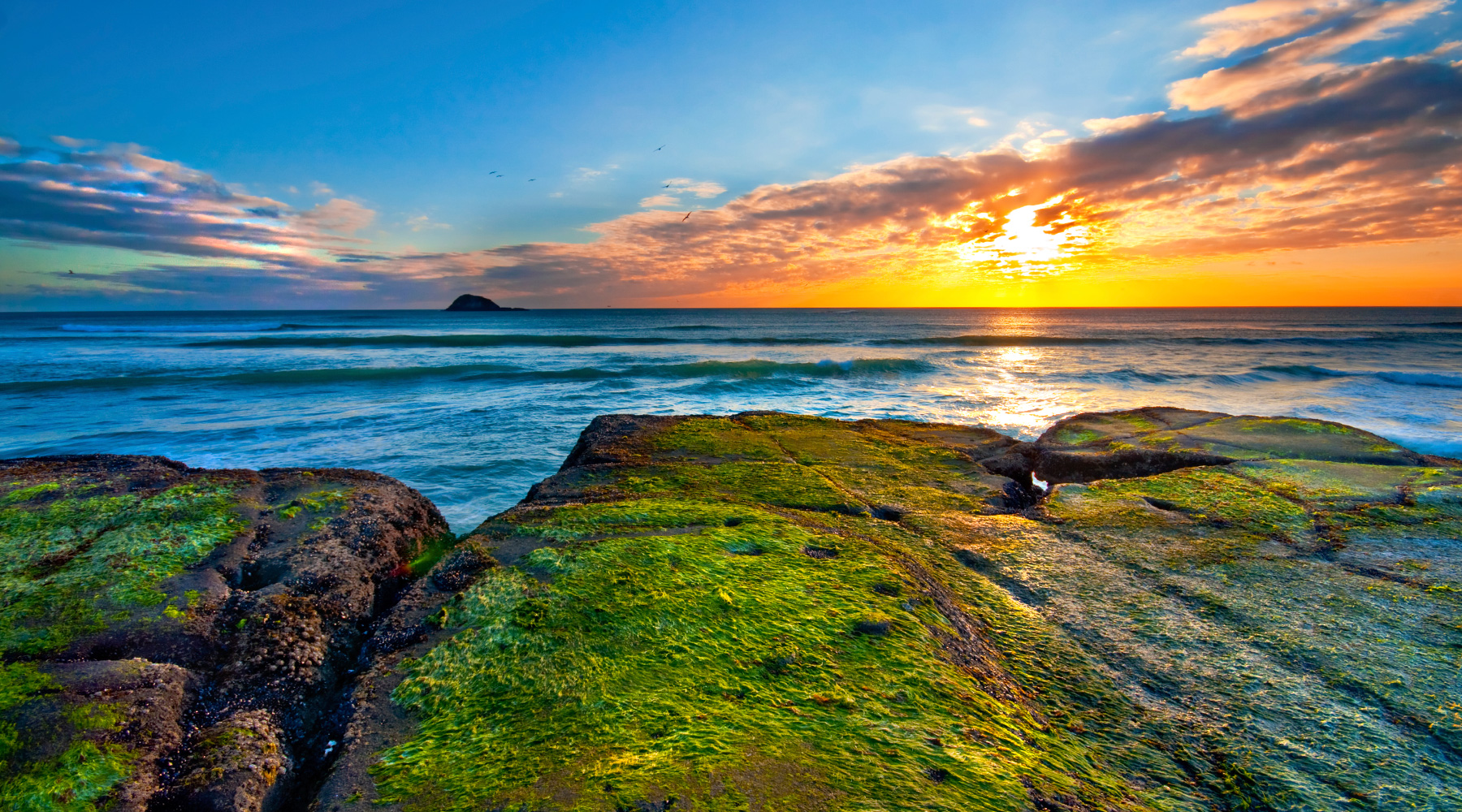 While Australia seems to have survived the worst of our coronavirus outbreak, and a vaccine is now on the near horizon, officials have warned that it seems unlikely that international travel will be a possibility until at least 2022. It comes as a blow, I’m sure, to many of us who were planning on gap years, post-graduation holidays and escapes from the clutches of lockdown in the coming months.

But there is a saviour. And her name is Jacinda.

New Zealand Prime Minister Jacinda Ardern has confirmed her openness to a Trans-Tasman travel bubble in the near future, allowing Aussies and Kiwis to travel between our neighbouring nations without mandatory hotel quarantine. New Zealanders have already been allowed to enter Australia after their successful containment of COVID-19, and the reverse side of the bargain is on the horizon after recent outbreaks in Adelaide, Brisbane and Sydney were successfully quelled.

So, you may not be able to backpack through Europe. A US road trip might be out of the question. And you certainly won’t be trekking to Machu Picchu. But why not turn your sights to our neighbours over the ditch? Here are five places you should definitely pay a visit to when New Zealand’s borders open up. 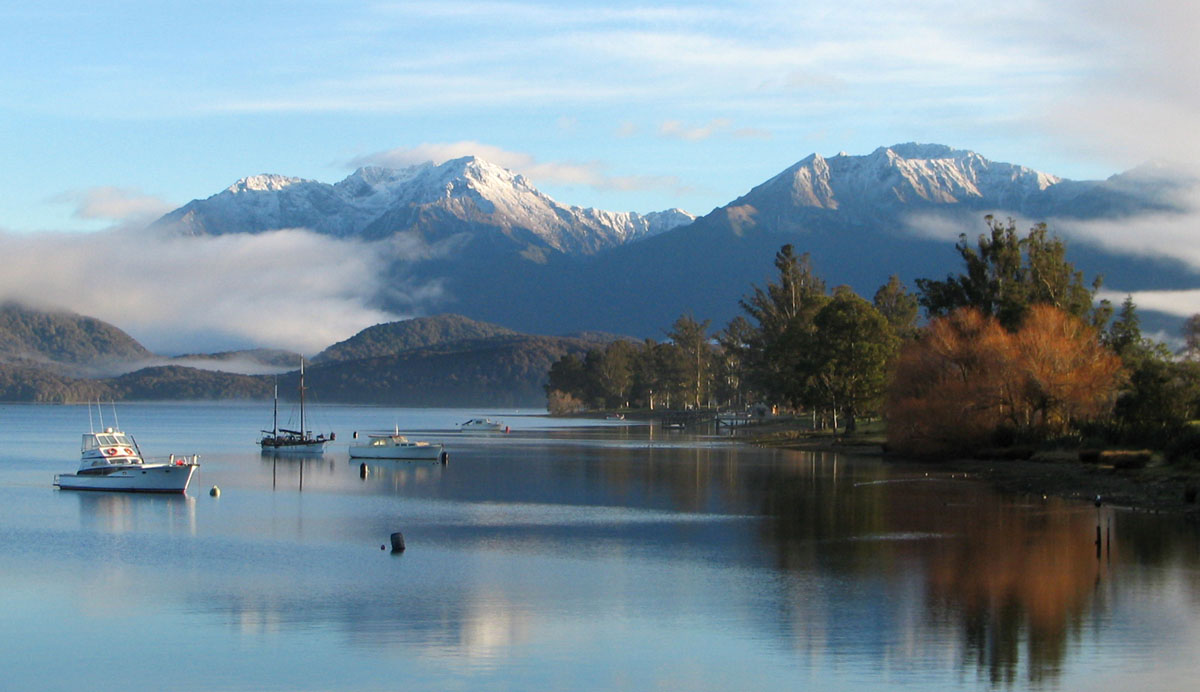 Te Anau, a small town on the shores of the largest lake on the South Island, is the gateway to New Zealand’s world-renowned glaciers and fjords. A short drive to the south of Queenstown, it lies within the borders of Fiordland National Park, famed for its spectacular scenery.

The town is used as a base for visiting many of New Zealand’s most famous natural wonders, including Milford Sound and Doubtful Sound, as well as opportunities for kayaking, cycling, jet boat riding, fishing, hunting, seaplane and helicopter rides and hiking in some of New Zealand’s most beautiful landscapes.

The town itself has a population of less than 2000, which means you’ll be away from the hustle-bustle and immersed completely in the spectacular wilderness of the mountains, glaciers and fjords. There are few places in the world that can afford you such a magnificent view.

A popular location attraction is the Te Ana-au Caves, right across the lake from the township itself, which are not only an extensive and beautiful natural cave network but feature an underground grotto of glowworms, which can be viewed on daily guided tours. Now that’s something you won’t see in many other places in the world. 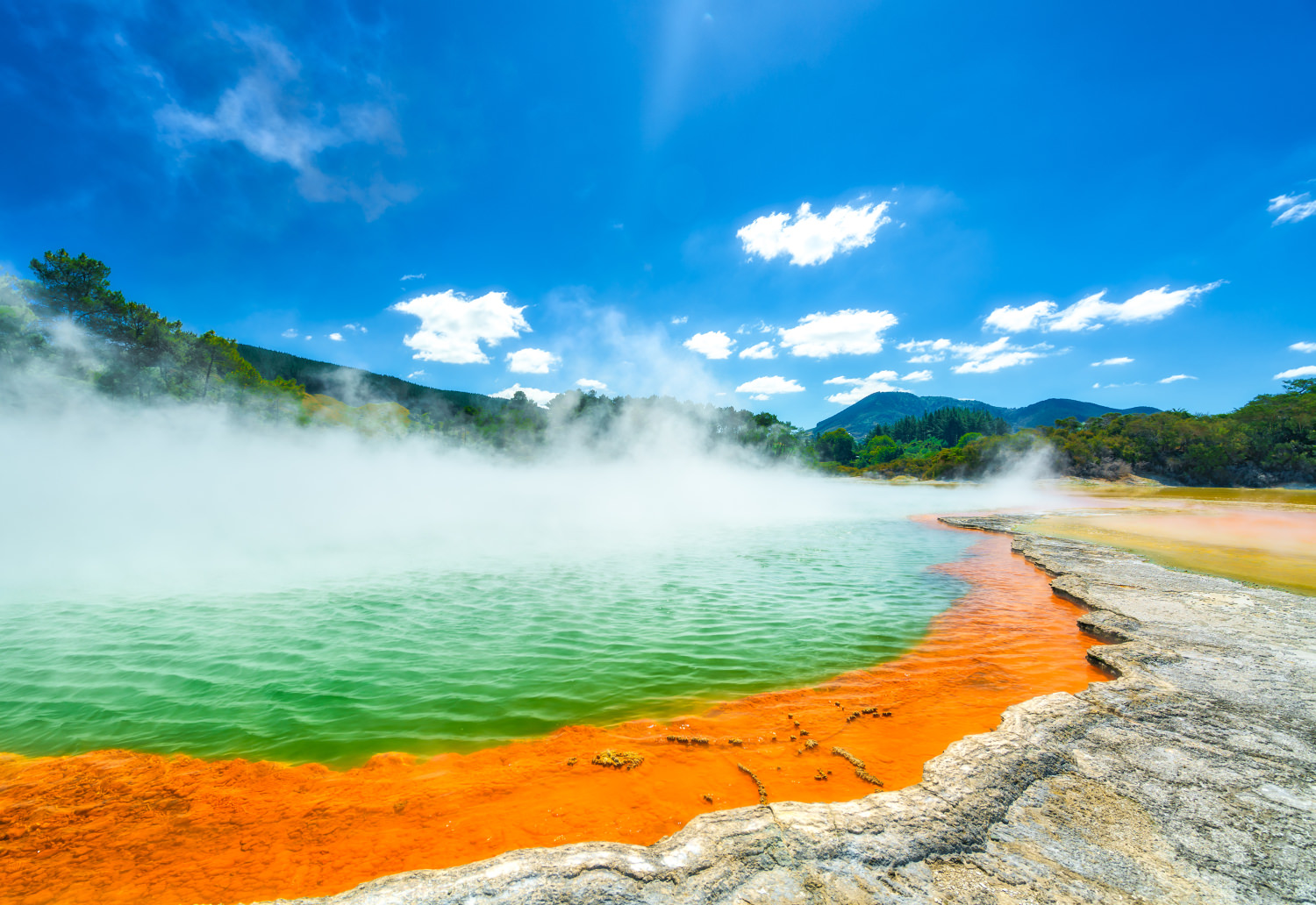 Rotorua is the only large (by NZ standards) population centre to reach this list, and rightfully so. It is located on the southern shores of Lake Rotorua on the North Island and is known for its geothermal activity – featuring world-famous geysers and hot mud pools.

Not only that, but Rotorua is also a centre of Maori culture, being surrounded by tourist villages such as Mitai, Whakarewarewa and Tamaki, which all feature cultural shows of traditional music and dancing. They’re a great place to enjoy traditional cuisine as well, such as a hangi meal cooked in an underground pit.

Find yourself a holiday park with hot spring baths and enjoy the glorious climes of the central North Island. There is just so much to see around Rotorua.

The city itself is worth a visit, too. From its museums and galleries to its markets, its golf courses to its beautiful forests, Rotorua is a city so full of beauty and wonder that you’ll never want to leave.

I am personally a big fan of the beautiful destinations that are often overlooked by other travellers. While the crowds might be headed to the Bay of Islands, make your way to the sparsely-populated Hokianga Harbour, best visited with a tent or an RV. This is one of New Zealand’s hidden gems.

The area is predominantly Maori, meaning it is steeped in culture and history that will fascinate and inspire. Once you’ve let your jaw drop at the natural beauty and the Maori heritage, there’s plenty more to do for the whole family around the harbour as well.

Dune boarding, hiking, horse trekking and dolphin-watching are among the many popular activities in the Hokianga. You could also pay a visit to the nearby villages of Omapere, Opononi or Rawene, each with their own unique charm.

Hokianga Harbour is also only a short distance from the Waipoua Forest, home to two of the largest living native kauri trees. You could easily while away a couple of weeks just exploring this incredible natural beauty on the North Island – all the while avoiding the flood of tourists that are likely once the bubble opens. 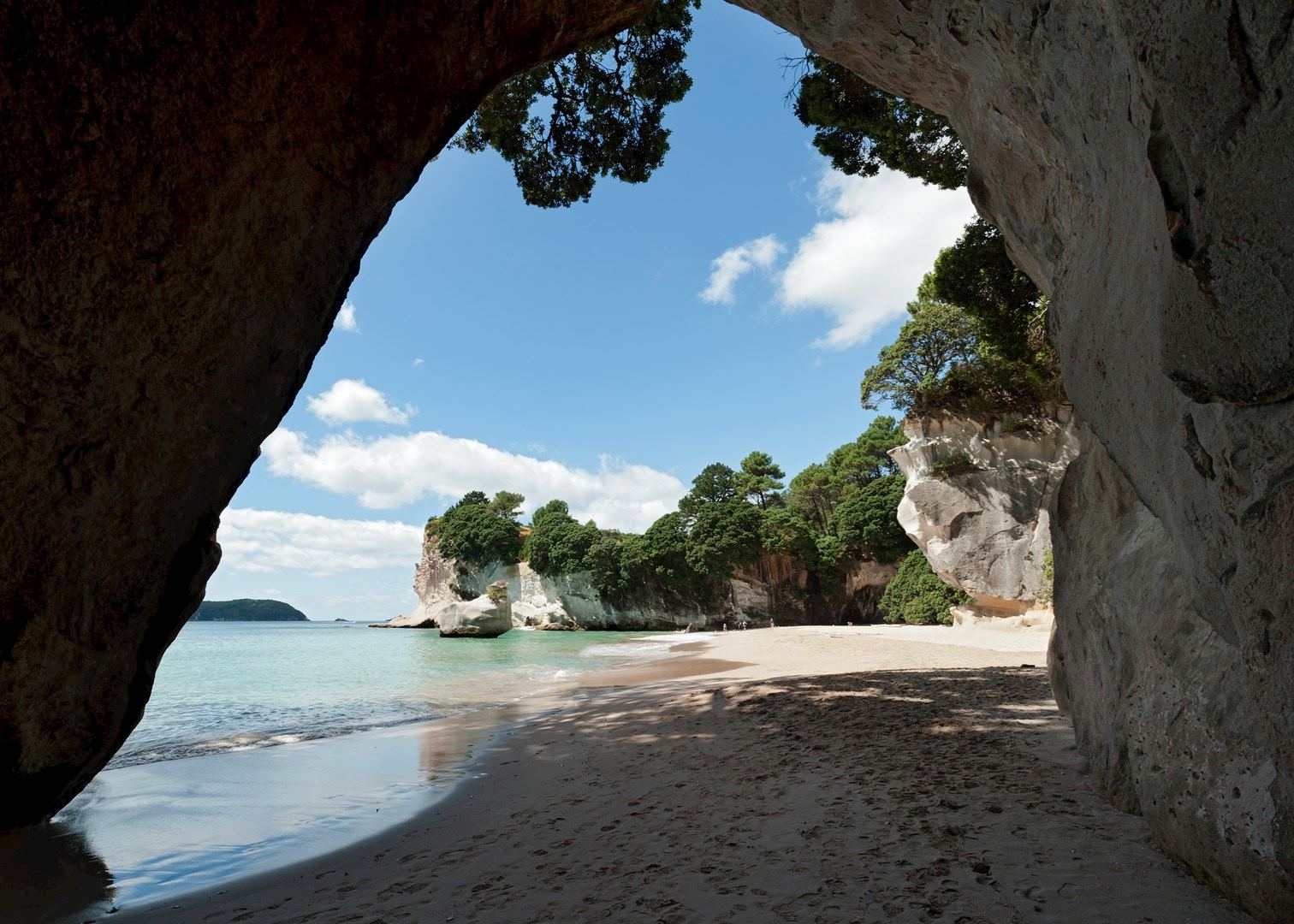 With shades of Australia’s very own Great Ocean Road, the Coromandel Peninsula is a stunning coastal location with so much to see that you could spend your entire holiday here and still want to come back for more. If you want a taster of New Zealand’s North Island, this peninsula within arm’s reach of Auckland will tell you everything you should expect from the beautiful Pacific nation.

With its stunning beaches, hiking trails and laid-back towns, the peninsula feels a world away from the freezing climes of Queenstown or the thermal springs of Rotorua. It speaks to the diversity and beauty of New Zealand in a completely different way.

Some of the popular destinations include Hot Water Beach, which features hot springs just inches below the sands of the beach; Cathedral Cove, renowned as one of the most beautiful beaches in the whole country; and the Pinnacles and Coromandel Coastal Walkways, some of New Zealand’s best hiking routes – which is really saying something!

You could make an overnight trip here from Auckland or Tauranga, but there is so much to see, it would be foolish to cast it aside as a day trip. Consider spending up to a week here. 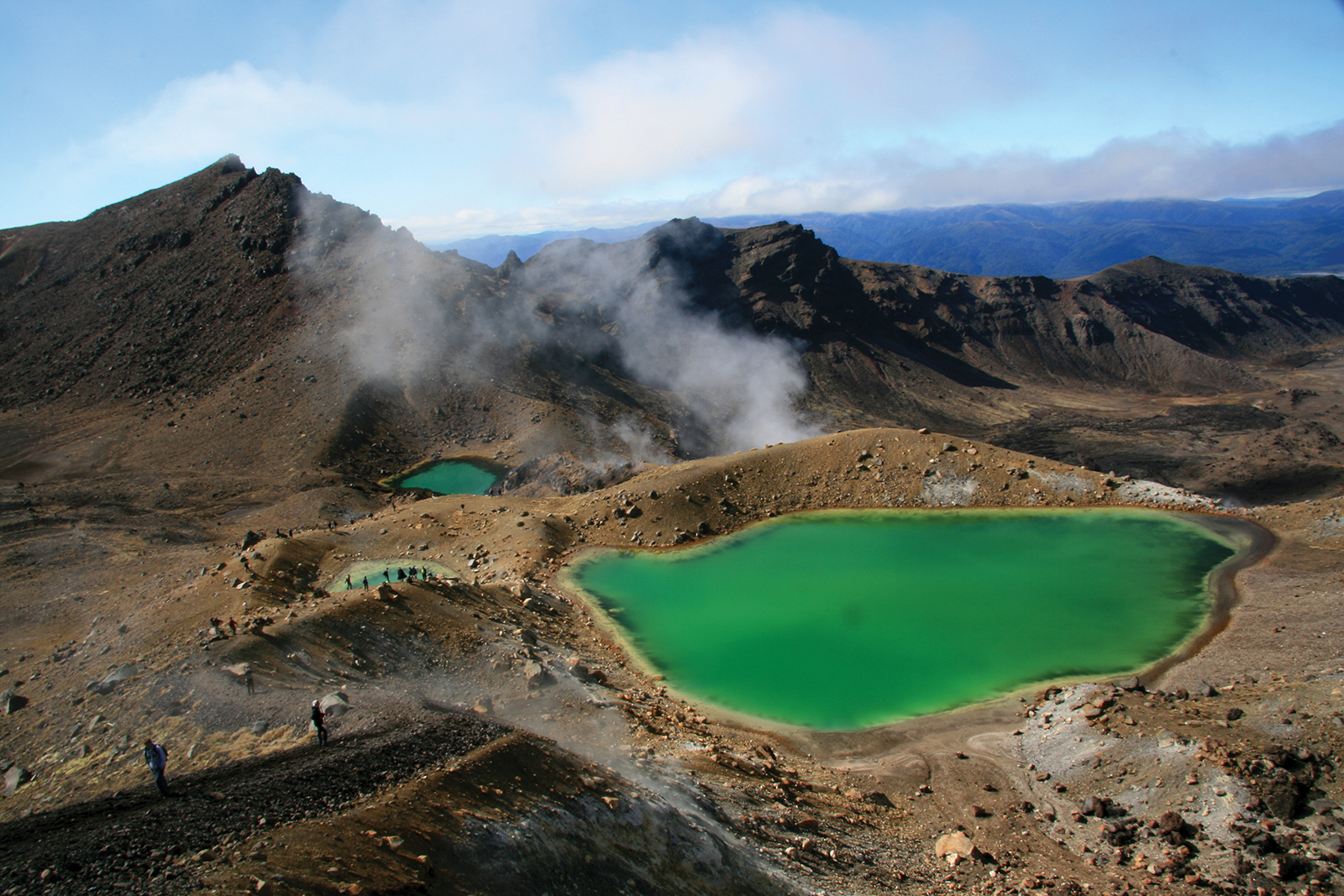 We’ve covered New Zealand’s glaciers, fjords, hot springs and beaches, but there is something else our neighbours are renowned for – their active volcanoes. Tongariro National Park is a UNESCO World Heritage Site listed for both its natural and cultural significance, and it’s centred around not one, but three volcanic peaks.

Mounts Tongariro, Ruapehu and Ngauruhoe are the centrepieces of this huge and historic park – the sixth national park to be established in the world and the oldest in New Zealand. From the sparkling Mahuia River to the famous Emerald Lake, and the ski fields to the volcanic peaks themselves, around every corner is something that will take your breath away.

If you’re a hardcore hiker, consider taking on the Tongariro Alpine Crossing – a spectacular day hike with a decent challenge that will take in the sights and sounds of one of New Zealand’s natural treasures.

Located on the high central plateau of the central North Island, the park is accessible from several major centres, and within a half-day’s driving distance of both Auckland and Wellington. It simply must be a waypoint on your next New Zealand trip.

So, let us know – were you planning an overseas trip in 2021? And will you now consider New Zealand instead? What places in New Zealand do you think we should have mentioned? We’d love to hear from you.