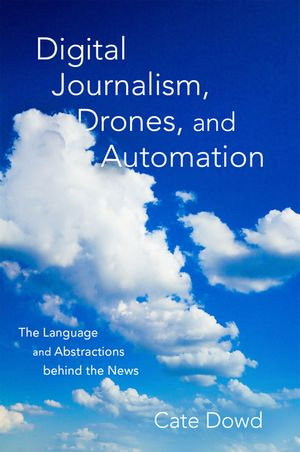 Jake was lucky enough to sit down with UNE’s very own Cate Dowd to discuss the theories presented in her new book, Digital Journalism, Drones, and Automation: The Language and Abstractions Behind the News, published by Oxford University Press in March.

The book is a fascinating dive into the partnership between news media and social media and the consequent impacts and effects on digital journalism. Dowd also examines the use of new methods of mobile journalism such as civilian drones in journalistic reporting, especially during the European asylum seeker crisis. Dowd also analyzes the ability of intelligent machines and automated devices to simulate ethical human behaviour and better understand the world of online data. Dowd also assesses how journalism has been impacted by online technology and data storage over the last 10 years.

For several years now Dowd has both designed and coordinated several media units, including Digital and Social Media, Internet Studies, Film Techniques and Digital FX, and News and Journalism. With a clear focus on digital media; she also completely redesigned News ad Current Affairs back in 2016. Despite her clear interest in the digital areas of media and communication, she has also taught numerous other units throughout the areas of media studies.

Listen to the interview below as Jake talks with Cate about her theories, methods, and findings, as well as how she incorporates her findings into her teaching methods.