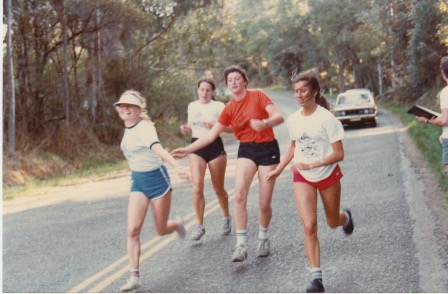 In a world that has seen countless events and gatherings cancelled due to COVID-19 restrictions, a month ago it looked as though the Earle Page College Coast Run might have to join them on the chopping block. However, with the use of technology and some format tweaks, a socially distanced version of EPC’s Coast Run event was held on Friday, 18 September 2020 allowing the run to celebrate its 40th anniversary.

Coast Run was developed by EPC alumni and UNE Business School lecturer Brent Gregory. With his philosophy of “it only takes one person to change the world” in mind, he organised the first event in 1980 where participants first ran from Armidale to Coffs Harbour. The rest is history, and the event has become a staple of the UNE calendar, with over $500,000 raised for children’s medical research.

Coast Run is usually a two-day relay event in which participants run in sections, beginning at the colleges at 6:30 am and heading down to Armidale Creeklands for breakfast. From there pairs relay in kilometre segments, all the way to Ebor falls for lunch before a 20-kilometre group run along the picturesque Deervale road, finishing at Dorrigo for dinner. The second day commences at Dorrigo and heading through the gorgeous scenery of Bellingen and Coffs Harbour before finishing at Coffs Jetty where everyone involved gets to jump into the ocean.

For 2020, Coast Run Goes Global has replaced the usual relay marathon. Beginning on 14 September, a virtual online run has been taking place with participants running wherever they can, for as long as they can finishing with a campus run comprised of a 2 and 5-kilometre track around the UNE Campus throughout the day for on-campus students, staff and alumni. Founder Brent Gregory officially opened the run with speeches by Vice-Chancellor Brigid Heywood, Head of Earle Page College Kathie Hunt and 2020 Convenor Lewis Wilde.

Before the runners headed off, we were able to have a quick chat with Brent Gregory, who was only too eager to talk about the history of the event. Remarking on how proud he was to see so much money raised for the CMRI, he praised the efforts of everybody involved in keeping Coast Run on the calendar every year, including the three Convenors of the run that succeeded him. He also praised everyone that had come together at the last minute to form CRGG in the face of the pandemic and expressed hope that the traditional event would return in 2021.

This connectivity with the greater community is something that Vice-Chancellor Heywood was especially pleased to see. She was kind enough to sit down with us right after beginning the race and expressed delight at the “golden thread” that Coast Run was able to use to connect current college residents, alumni and the broader New England community. While touching on the disappointment at not being able to hold the event as it would usually run, Vice-Chancellor Heywood expressed pride in everybody who had made the event such a success. Not being able to participate in the run herself due to injuries sustained through an unfortunate accident on her bicycle, she jokingly remarked that she was proud to have taken part in the warm-up exercises alongside a stormtrooper (and every other enthusiastic runner).

Congratulations to all the participants, organisers, and all individuals who helped to make CRGG a reality. It was terrific to see the 40-year-old event going strong despite the setbacks it faced. Look out, Coffs Jetty, after a year off, EPC will be back with a vengeance in 2021!

As is the case every year, all fundraising money raised in 2020 will be going to the Children’s Medical Research Institute (CMRI).