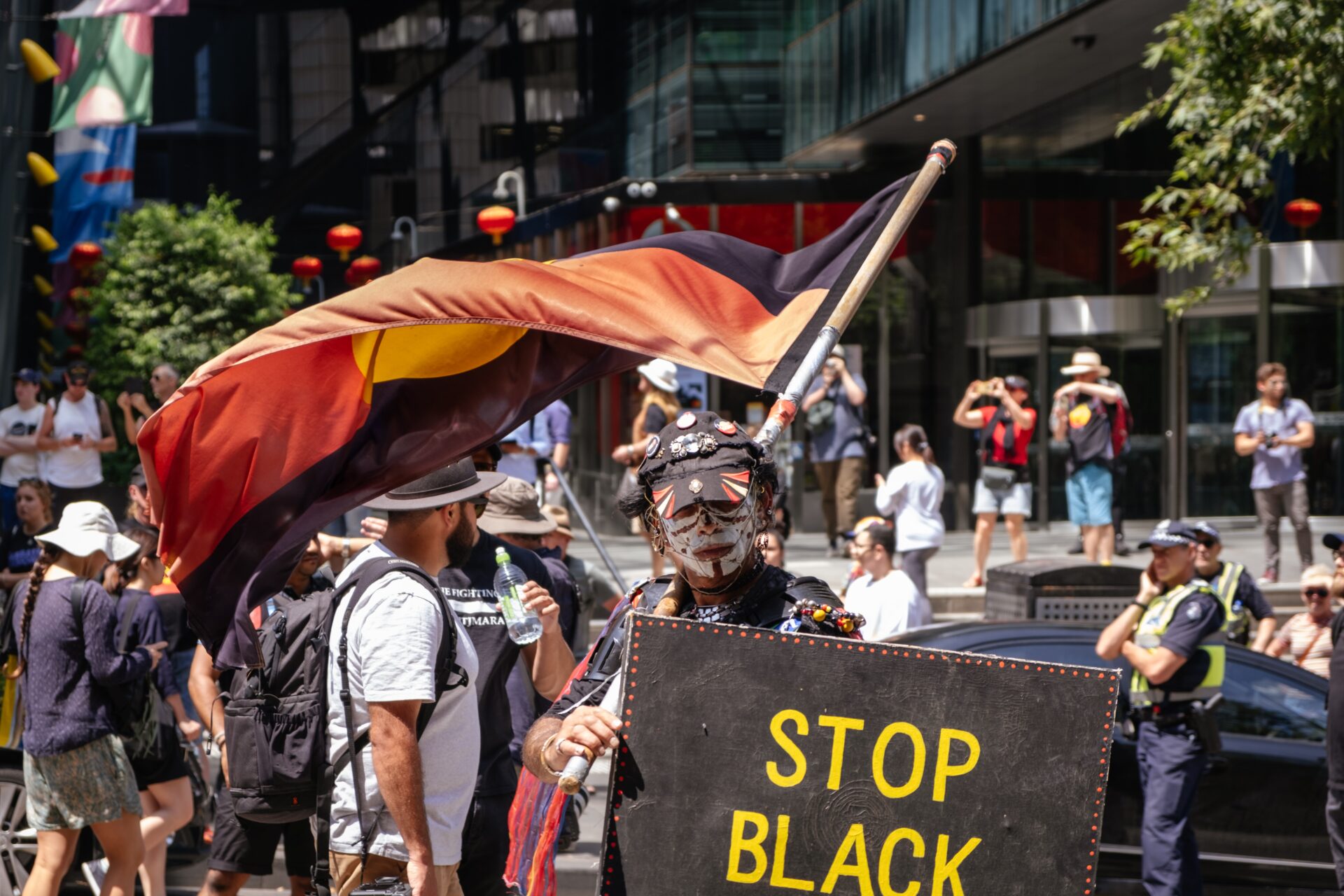 Home / News / Culture / Despite 432 Indigenous deaths in custody since 1991, no one has ever been convicted. Racist silence and complicity are to blame

Despite 432 Indigenous deaths in custody since 1991, no one has ever been convicted. Racist silence and complicity are to blame

You probably know the details of the death of George Floyd. He was a doting father and musician. He was killed when a police officer, Derek Chauvin, knelt on his neck for nearly nine minutes while he cried out “I can’t breathe!”

Chauvin has been charged with third-degree murder and there is speculation other officers involved will be charged soon.

Do you know about David Dungay Jr? He was a Dunghutti man, an uncle. He had a talent for poetry that made his family endlessly proud. He was held down by six corrections officers in a prone position until he died and twice injected with sedatives because he ate rice crackers in his cell.

An officer replied “If you can talk, you can breathe”.

At the end of a long inquest that stretched to almost four years, the coroner declined to refer the officers involved in Dungay’s death to prosecutors (who might consider charges) or to disciplinary bodies.

Paul Silva, Dungay’s nephew and among his most powerful advocates for justice, said as he was leaving court,

What am I meant to do now? Go home, look at the ground. Tell my Uncle? — Sorry, Unc, there’s no justice here!‘

This week, he told the Guardian:

When I heard [George Floyd] say ‘I can’t breathe’ for the first time I had to stop … My solidarity is with them because I do know the pain they are feeling. And as for the Aboriginal deaths in our backyard … it’s not in the public as much as it should be.

A perception Indigenous deaths in custody are expected

Many people on this continent know more about police and prison violence in the US, another settler colony, than the same violence that happens here. Both are deserving of our attention and action, so what’s behind the curious silence on First Nations deaths in custody in Australia?

Aboriginal and Torres Strait Islander people have raised this concern long before today in the media and social media.

Why do we have to? The reasons are complex, but boil down to a system of complicity and perceived normality in Indigenous deaths at the hands of police and prisons. The settler Australian public simply does not see Indigenous deaths in custody as an act of violence, but as a co-morbidity.

Amanda Porter, an Indigenous scholar of policing and criminal justice, wrote about media coverage of Indigenous deaths in custody in Australia compared with the US.

She noted differences in the way the media covered the police shooting of Michael Brown in Ferguson, Missouri, with the killing of Mulrunji Doomagee on Palm Island:

The choice of language is important: it evokes a certain response in the reader and shapes our understandings of events. In the case of Palm Island, the often-repeated meta-narrative of so-called ‘dysfunctional’ and ‘lawless’ Aboriginal communities served to justify further acts of colonial violence.

Since 1991, some 432 Indigenous people (and possibly more) have died in custody.

In my 2018 pilot study on a sample of 134 Indigenous deaths in custody since the Royal Commission into Aboriginal Deaths in Custody, I found coroners considered referring just 11 deaths to prosecutors and only ended up referring five. Of those, only two made it to court and both resulted in quashed indictments or acquittals.

These are monumental figures. They are also stories of deep systemic complicity, both before and after death. And they are full lives, with loved ones who mourn and fight for them.

The scale of devastation is unthinkable – and violent, and racist.

What makes Australian silence about deaths in custody so especially bizarre is that, unlike the US, we have a mandatory legal review of every death in custody or police presence. Each case, regardless of its circumstances, goes before a judge called a coroner.

Just as public political will is always changing, so is law and legal strategy. Compared to the campaigns for justice for black people killed by police in the US, which have made relative gains, many families here are working in a complex space of honouring their loved ones, proper cultural protocols around death and the dead, and securing CCTV footage to mobilise the public for justice.

Coroners have offered mixed responses, and each state and territory’s coroner approaches the question in a slightly different way.

After the death of Ms Dhu, a Yamatji woman, in police custody in Western Australia in 2014, persistent advocacy from the families and media organisations prompted the coroner to release footage of her treatment before her death. Coroner Ros Fogliani did so

in order to assist with the fair and accurate reporting of my findings on inquest.

Members of Dungay’s family, who had applied to have it released, responded with exasperation. It was eventually shown on the opening day of the inquest, although the fuller footage requested by the family remains suppressed from public view.

Other ways families are silenced

There are other transparency issues that give a legal structure to silence about Indigenous deaths in custody. Recently, there appears to be a new push in non-publication or suppression orders being sought by state parties in coroners courts.

In Dungay’s inquest, for instance, the media was ordered not to publish the names, addresses or any other identifying features (including photographs) of 21 NSW corrections staff members.

There have been other suppression orders in deaths in custody matters before criminal courts, such as the identity of the officer facing a murder charge in the death of Yamatji woman Joyce Clarke in Western Australia last year.

Officers in South Australia are also going to some strategic effort to avoid testifying before the inquest into the death of Wayne Fella Morrison, a Wiradjuri, Kookatha and Wirangu man, or even speak with investigators on the grounds of penalty privilege.

So far, they have not been successful in claiming the blanket privilege, despite taking the matter to the SA Supreme Court.

investigations surrounding the cause of death in prisons can have a great impact for our grieving families to at least get an account of what happened to our loved ones in the absence of our care. It can also raise the spotlight on the behaviours of correctional and police officers – like those that piled atop of my brother’s body.

Outside of coroners courts, there is the threat of subjudice contempt, when media coverage may pose a prejudicial threat to a potential trial.

This carries a risk for families who speak out about their loved one’s deaths in a way that even implies something happened or someone did something. Subjudice contempt poses liability to them personally when they speak out, but also could jeopardise their push for justice.

This puts First Nations peoples at the mercy of what can be raised before a jury, judge or coroner. With lengthy procedural delays, this can also mean a case is hard to talk about publicly for years.

This is problematic given that timely publicity about deaths in custody is what drives attention. Taleah Reynolds, the sister of Nathan Reynolds, who died in custody in NSW in 2018, said,

We’re coming up to a year since he died and we still don’t know anything more.

I feel like they don’t have any remorse; they hide behind the system. No one’s held accountable, that’s the most frustrating part.

Combined with plaintiff-friendly defamation laws, media ignorance and racist editorial decisions, and a lack of institutional support for Indigenous journalism, this contributes to some of the hedging language we see around police brutality in Australia, like someone “appearing” to do something captured on video.

All of this leaves our public discourse full of black bodies but curiously empty of people who put them there.

The power of public campaigning

Prosecution or referral seems to come only from cases where First Nations families have strong public advocacy and community groundswells behind them and strategic litigation resources (not just inquest legal aid).

As the late Wangerriburra and Birri Gubba leader Sam Watson said of the campaign for justice for the death of Mulrunji Doomagee on Palm Island:

Unfortunately, the government had to be dragged to this point screaming and kicking every inch of the way. Every time there’s been a breakdown in the procedure, the family and community on Palm Island are being subjected to more trauma, drama and unnecessary grandstanding by politicians.

Right now, three deaths are either before prosecutors or in their early stages of prosecution. All have been part of growing, public campaigns driven by their families and communities — although many others, like Dungay’s family, have done the same and still been faced with institutional complicity.

Clearly, there is much legal structure that supports this silence, but the basis of the silence itself is colonisation and white supremacy. As Amy McQuire writes:

Their wounds also testify to this violence. But while this footage has been important for mobilising Aboriginal people, non-Indigenous Australia is still complacent and apathetic.

They are not ‘outraged’ because they are not ‘shocked’. There is nothing shocking about racist violence perpetrated by police, because it is normalised.

When we do hear about the Indigenous lives lost in custody, it is undoubtedly because of the persistence, expertise and courage of their families and communities who mourn them. But it is not enough to hear about justice, justice must be done.