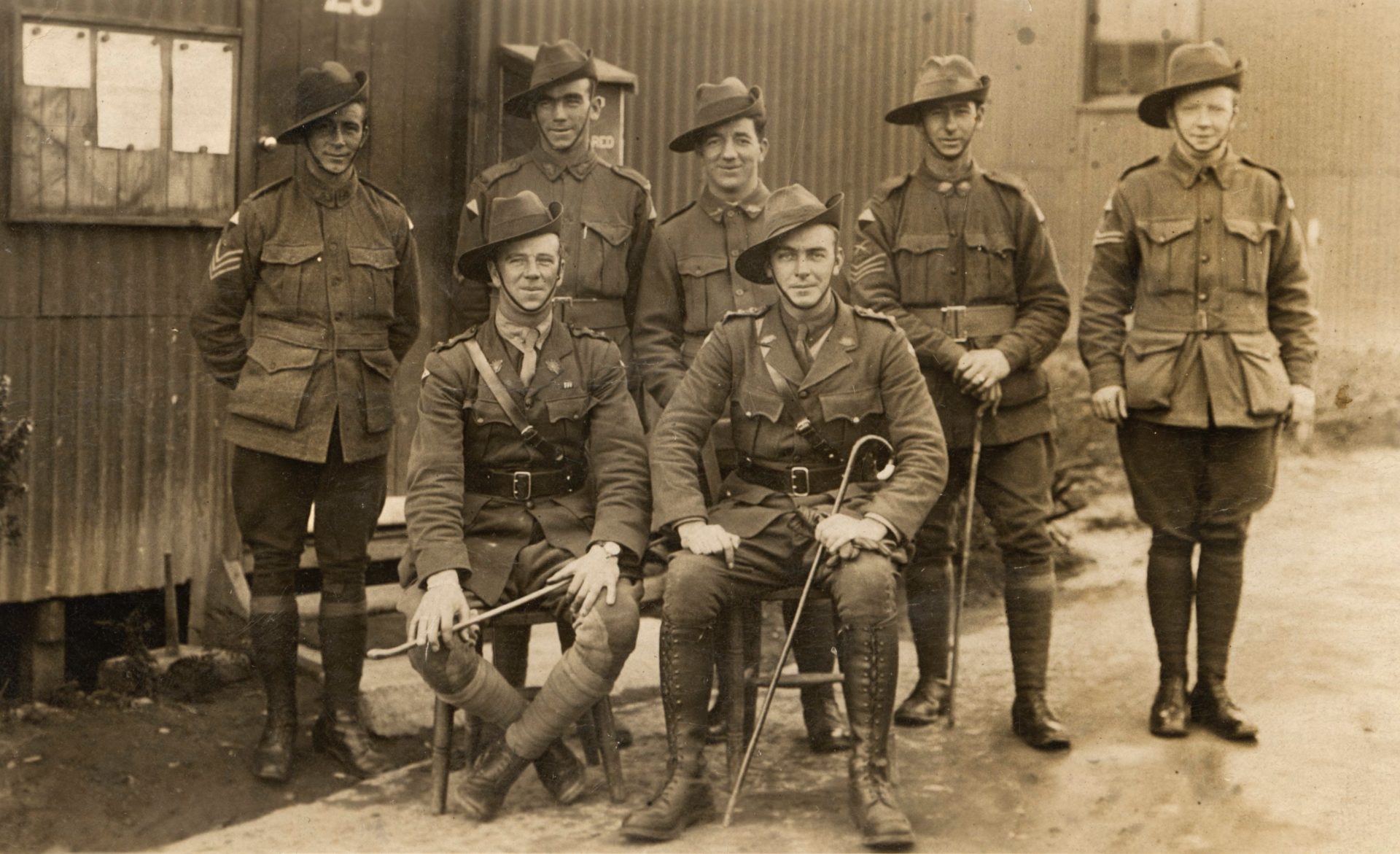 As COVID-19 wreaks havoc on our usual way of life, the language of war proliferates. Prime Minister Scott Morrison has called it the “the battle that all Australians are enlisted in as we fight this virus”. French President Emmanuel Macron has declared: “We are at war”; and US President Donald Trump is calling himself the “wartime president”.

For Asian Australians, and temporary Asian migrants, this fervour has brought increased racist attacks against them. This kind of xenophobia is common in wartime, and for Japanese Australians it was most pronounced during and after the second world war.

In considering the significance of the upcoming Anzac Day, we look back at the experiences of two of the estimated two dozen Japanese Australians (or Nikkei) who enlisted. Reflecting on their treatment during wartime, we ask what their stories reveal about the pressures on Asian Australians now.

Japanese people started migrating to Australia in the mid-19th century – before the White Australia Policy (established in 1901 as the Immigration Restriction Act). Some of the earliest Japanese migrants were circus performers, pearl divers, and sex workers. Japanese communities were established in cities including Broome and Darwin where the pearling industry was strong.

These migrants, referred to around the world as Nikkei migrants, established livelihoods and families in Australia, both within cultural groups and after marrying white and Aboriginal Australians. By the second world war, there were more than 1,000 people of Japanese descent living in Australia.

There were 28 Australians of Japanese descent who served. However, there may be more. Unlike their American brethren, including the famous Japanese-American 100th/442nd Infantry Regiment who became the most decorated unit in US military history, Australians of Japanese heritage were officially prohibited from enlisting. Those who did serve were only able to do so by hiding their roots.

There were two reasons for this. The first was a blanket ban on all non-Europeans from enlisting. The Defence Act on 1910 exempted all those who were “not substantially of European origin or descent” (as determined by an appointed medical professional) from miltary service. Nikkei were not considered for military armed service roles, or even translation and interpretation roles — despite the knowledge some had of both English and Japanese that made them suitable for such functions.

The second reason for their prohibition from military service was the classification of all Japanese as enemy aliens, leading to their mass internment in civilian camps during wartime. Around 4,000 Japanese (including Japanese Australians) were imprisoned.

Unlike German and Italian Australians, who were selectively interned and largely consisted of adult men, a more blanket approach to the internment of Japanese. Australian-born citizens with Japanese heritage, young children and even Australian spouses were interned in camps, along with elderly residents who had been in Australia since before the White Australia Policy. Many were deported to Japan after the war.

In spite of this, we know at least 28 Nikkei did enlist.

One of them was a man named Mario Takasuka. Born in Mildura to Japanese rice cultivators Jo and Michiko Takasuka, Mario worked as an orchardist before his enlistment. Although arriving at the height of the White Australia Policy, the Takasuka family were able to enter and remain in Australia for an extended period because of their important cultivation research, which eventually led to them being the first rice growers in Australia.

In 1940, Mario volunteered locally to join the Second Australian Imperial Force (AIF). After being rejected twice at his local enlistment centre, he was eventually accepted after travelling to Melbourne, where his Japanese heritage was unknown and the recruiting officer happened to be unaware of the military regulations excluding non-Europeans.

Mario initially served in Crete and Alexandria in the 2/3 Light Anti-Aircraft regiment. However, after Japan entered the war at the end of 1941, military authorities went to great lengths to have him removed, including launching an enquiry into “the presence of a full-blooded Japanese in the Australian army”.

Within his unit, Mario was well liked, and his commanding officer fought hard to keep him deployed, stating:

His record as a soldier both in and out of action has been exemplary and in consideration of his outstanding service in Crete, I selected him for promotion as a bombardier. He is most popular with the men in his [battalion] and the recent declaration of war against Japan has in no way affected his popularity or his ambition to serve.

Thanks to this support, Mario was able to remain with his unit and went on to serve in Palestine, where he received a written commendation from his general for his efforts in a train crash rescue. He was then promoted to gun sergeant and deployed to New Guinea. Mario returned from the war in 1945 and continued to live in Australia until his death in 1999, aged 89.

The Takasukas were well-respected within their local community. Mario’s older sister Aiko was a school teacher, and his older brother Sho was the first Japanese born Australian citizen to hold a local government position. Sho did not serve in the second world war, but was a member of the volunteer defence force until his internment in 1941.

Unlike Mario, Sho was Japanese by birth and the military was unwilling to consider him for service. He was interned as a result. The local community fought hard for his release, with some members going so far as to testify on the family’s behalf at the Aliens Tribunal.

Sho is described in the tribunal minutes as being “as loyal a citizen as any living in our district… always willing to help”, and the family reputation was “absolutely one of the best”.

The Swan Hill police force apparently felt ashamed and embarrassed at the prospect of arresting the Takasuka family, and sought advice from the Attorney General about circumventing the regulations. The Takasukas’s tomato farm was supplying food to the Department of Defence after all. These examples of community involvement led to Sho Takasuka being released and allowed to remain within a 14 kilometre radius of his farm.

Others were treated more harshly still. Unlike Mario Takasuka, Joseph Suzuki was born in Japan and migrated to Australia with his Australian mother just six months after his birth. On June 19, 1940, he registered for service in the AIF in Sydney, falsely listing his birthplace as Geelong and raising his age from 17 to 22.

Joseph served in the 2/1 Survey Regiment in Australia until February 21, 1941, when his identity was discovered. He was discharged “on racial grounds” and was interned at the Japanese Internment camp in Hay, NSW.

Suzuki was steadfast in his fight to prove his loyalties to the Australian government. He applied for release from internment and on May 13, 1942 stood before a tribunal where he emphasised his desire to assist the war effort in any way he could, including being prepared to take the risk of being taken prisoner or shot as a traitor by the Japanese military.

Joseph had a tattoo of a map of Australia, and in an interview with researcher Yuriko Nagata, his sister spoke of him as always being a loyal Australian, adding “the proof is that he got a medal from the Queen”. Suzuki later told The Sunday Telegraph in an interview that he was “an Australian to the backbone”.

Although the tribunal concluded in 1942 that Suzuki should be released, he remained interned until August 21, 1944. This was due to reports from the Australian Military Forces (AMF) Eastern Command in July 1942 which argued that as a person with Japanese heritage born in Japan, Suzuki was under “the influence of the fatalistic Emperor cult; [and] the obligation on Japanese to report intelligence to the Consulate”. It said “evidence of conversion to Christianity was no argument for Australian orientation”.

The military was also concerned Suzuki’s skills as a surveyor would be useful to the enemy. Further, his Security Service assessment presented to the government argued that “the son of a Japanese is always regarded as a Japanese even if he had some other nationality”. Because of his prolonged internment, Suzuki’s mental health suffered and he was hospitalised. This eventually triggered his release.

Suzuki and several of the other “mixed race” or Australian-born internees did not get along with the Japanese nationals in the camp. They were referred to as The Gang and were segregated in a separate tent. Suzuki said the other internees were friendly enough, but they had to “try to speak English” to communicate with him, as he did not speak any Japanese. Suzuki’s actions at Hay served as the inspiration for a fictional character named Peter Suzuki in After Darkness, the 2014 Vogel’s Literary Award-winning novel by Christine Piper.

After his release, Suzuki returned to Newcastle, where he was naturalised on June 12, 1945. He eventually changed his surname due to continued discrimination. In Yuriko Nagata’s influential book on Australian internment, Unwanted Aliens, Joseph’s sister Hannah stresses she does not want Joseph to be contacted for research, as it would upset him too much.

A sense of belonging

Mario Takasuka and his family experienced acceptance from the Australian communities around them. They had deep social ties and their loyalty was never in question. Suzuki, on the other hand, was continually rejected by his nation for being half-Japanese. Despite his loyalty to the nation and his white heritage, he was regarded as an enemy and this resulted in significant psychological pain.

Many Asian Australians will be experiencing an array of feelings to do with their sense of belonging to the nation right now. Do they feel included? Are they targeted for their race?

Earlier this year, it was reported planned Anzac Day celebrations at RSLs in WA were going to take place strictly in English and without Aboriginal flags or Welcome to Country. Thankfully this divisive approach was overturned.

Other Anzac Day ceremonies proffer a more inclusive attitude celebrating Aboriginal diggers and other ethnically diverse soldiers – including Chinese Australians. Reflecting on Takasuka and Suzuki’s lives prompts us to imagine the version of Australia we want on Anzac Day – especially in these alarming times of social isolation.

Asian Australians are among the vulnerable groups in our society during this pandemic. Wartime Nikkei histories may give us some perspective on the present.

It’s significant that so few Japanese Australian families share their internment stories. Just 141 Nikkei Australians were allowed to stay after the war; the rest were repatriated to Japan. As such, post-war Japanese Australian migrant identity was not built on the particular shared trauma of marginalisation that internment represents. Conversely in the US, internment galvanised the community into a powerful cultural and political force.

Nikkei Australian stories raise questions about Asian Australian responses to marginalisation. Joseph Suzuki remained loyal to a nation that repeatedly rejected and ostracised him. Is this a likely response from Asian Australians in the current COVID-19 climate?

Many Japanese Americans rejected former presidential candidate Andrew Yang’s call in the Washington Post early this month for Asian Americans to “embrace and show our American-ness in ways we never have before”. They recalled the pain of wartime internment, saying that now (and indeed, then) “being American should have been enough”.

It wasn’t possible to form an Asian Australian community response to racist attitudes during the second world war. It isn’t entirely clear if that is possible today. However, Mario Takasuka’s story does show us that Australians of different backgrounds can band together to defy racism and support each other in hardship.

Timothy Kazuo Steains, Lecturer in Gender and Cultural Studies, University of Sydney and Shannon Whiley, Researcher, The University of Queensland