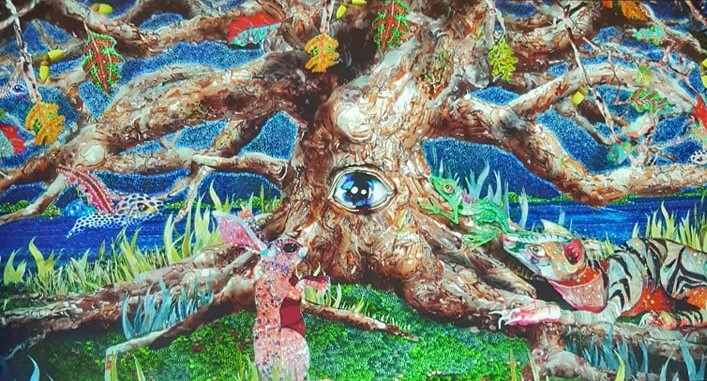 Home / News / Culture / The Art Party: Wilde in More Ways Than One

The Art Party: Wilde in More Ways Than One

On the 12th of March, students from the University of New England headed to the New England Regional Art Museum (NERAM) for the annual art party. The entire experience was free, from the bus, admission and the grazing platters. However, the biggest events of the night were the Del Kathryn Barton showcase and the student art-making section. Both were diverting experiences that defied the polished expectations of a gallery experience. NERAM proved that it was very much a contemporary service; one that should be leveraged more often by its nearby students. 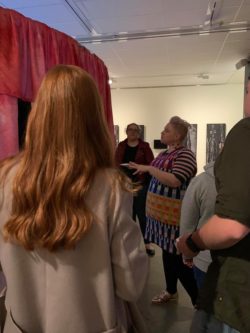 For anyone who hasn’t visited NERAM before, the destination is home to “one of the nation’s most significant art collections outside the capital cities, holding a collection of over 5000 works of historical, modern and contemporary art.”

The museum contains a multitude of different exhibitions, including art specific to the New England region and various travelling collections. One of the most recent was Del Kathryn Barton’s The Nightingale and the Rose. The showcase was based on Oscar Wilde’s short story of the same name, in which a young student attempts to romance a girl by procuring a red rose. Unable to find one, a nightingale takes pity on him and uses her lifeblood to create one. The story is one that Barton rendered in an extensive variety of paintings that incorporate her characteristic whimsical style of wild colours and use of line work. Her paintings were an inspiration we could use in our own works, we were told. As the only woman to twice receive the prestigious Archibald Prize, her work was certainly a sight to behold – in more ways than one.

Standing in the gallery surrounded by Barton’s artwork, the guide had gestured to a curtained area in the centre of the room. This, she explained, was a short film featuring the artwork of Barton, the direction of Brendan Fletcher and the voicework of actors such as Mia Wasikowska, Geoffrey Rush and David Wenham. The Nightingale and the Rose was nominated for several awards and, sitting down behind the pink curtains, it was easy to see why. The images and colours swirled viscerally on the screen, and the voice actors set the scene with their low, dramatic tones. Unfortunately, as we had the bad luck of sitting down several minutes from the end of the film, the conclusion was revealed. Even so, we waited for the film to loop and then re-watched its fourteen-minute entirety anew. Despite knowing the ending, we couldn’t tear our eyes away. It was captivating, evocative and, to risk using a clique, like nothing we had seen before.

The Nightingale and The Rose was far more graphic than the title hinted, not least because one of the titular characters was a talking nightingale with human breasts – a characteristic of Barton’s work that many viewers find confronting. The anthropomorphism of the film was not solely limited to animals, with several species of flora exhibiting human eyes and voices. The overall effect was somewhat upsetting, particularly in the central scene in which the nightingale gave its lifeblood to colour a rose red. The Australian Centre for Moving Images (ACMI) perhaps summarised the exhibition best, writing:

“[The film was] a remarkable take on Wilde’s earnest tale, the final production is an intense but stunningly ethereal and visceral journey. With a stirring score by Australian singer-songwriter Sarah Blasko and voiced by some of Australia’s most celebrated actors, Oscar Wilde’s The Nightingale and the Rose is a feat of multidisciplinary, collaborative art practice.”

It was definitely an experience to mull upon as we headed downstairs to begin the artistic portion of the art party. After seeing the work of one of Australia’s finest artists, we were keen to begin.

As well as an ever-changing array of new exhibitions, each year NERAM is charged with selecting an art style for attending students to attempt. This year, we were told, it was fingerpainting – a little unexpected for a distinguished art museum. We were each given a palette with a selection of primary colours, a sheet of paper and a handy booklet of information. We also had to contend with a magpie hurling itself around the room, but it was eventually shooed out the door, much to the relief of attending ornithophobics. Finally, we were able to paint.

After several trial paintings on paper, the final canvases were handed out. We were given just fifteen minutes to create an artistic masterpiece. Surprisingly, several students seemed to succeed at this and the results of the experience feature below: 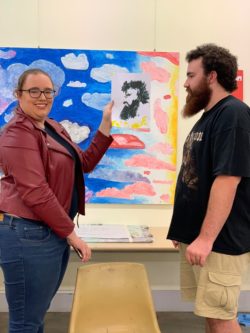 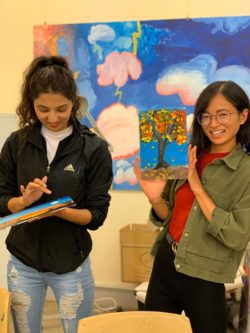 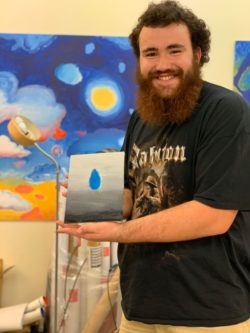 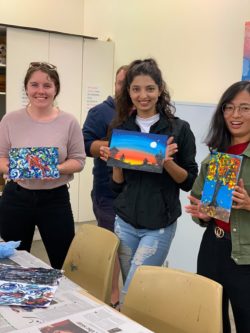 For anyone considering attending next year’s art party, the decision should be swift. One only has to consider the range of exhibitions available and the experience of creating one’s own masterpiece to make a decision. NERAM’s art party, or simply their daylight service, is certainly worth a visit.