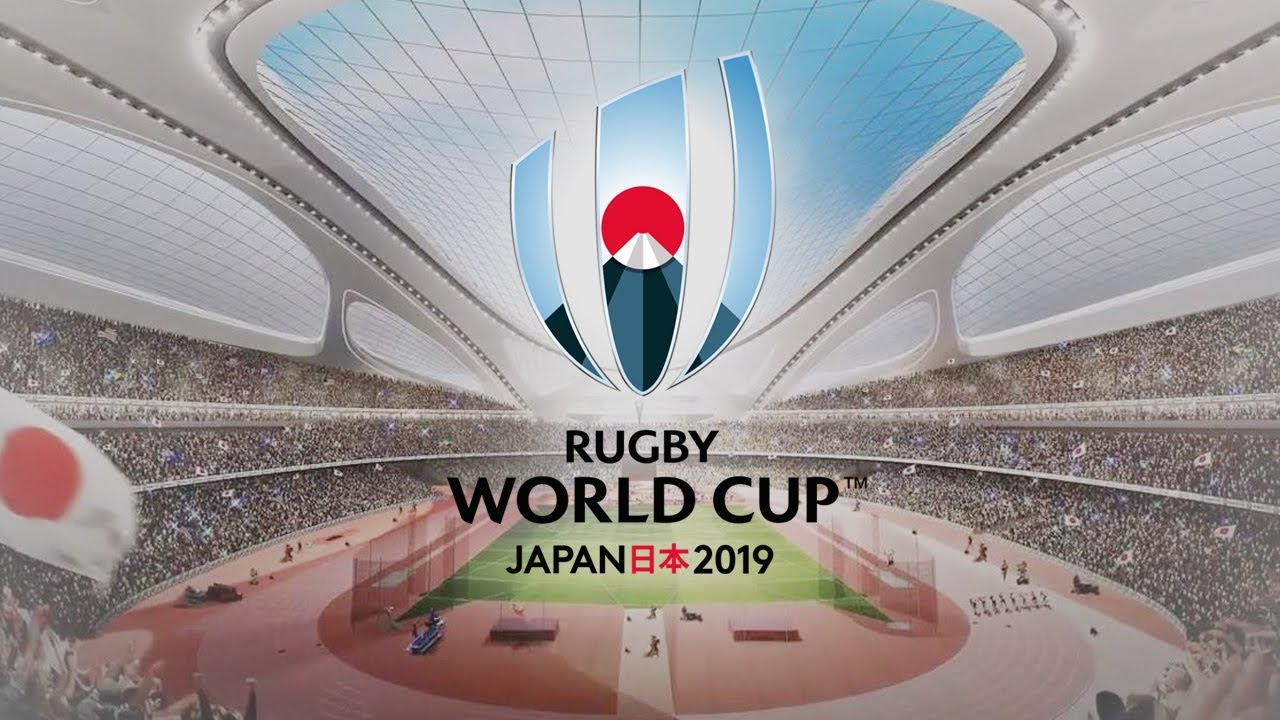 The Rugby World Cup – Get Hyped!

No doubt all you lovers of rugby out there will be getting very excited right now; the Rugby World Cup officially kicks off tomorrow night! Featuring some of the best players in the world, this year’s event is sure to be one for the record books.

Being hosted by first-timers Japan; no doubt the Blossoms will be hoping they can build on their surprise success in the last World Cup four years ago. The Blossoms upset South Africa in one of the matches of the tournament, and comfortable defeated Samoa and the United States to guarantee themselves automatic qualification to this year’s Cup, however a heavy defeat to Scotland would consign them to third place in their group and an early exit before the finals. Japan will be given the honour of opening the tournament; playing Russia in the first game of the World Cup in Chōfu.

In the interest of building excitement and anticipation, I have put together this guide explaining how the event will run, and giving you a run down of each of the four pools. The twenty qualified countries have been split into four pools, known as Pool A, B, C, and D. This was organised through a qualifying draw held in 2017. First, the twenty participants were placed into five bands. The top 3 bands were based on the World Rugby Rankings, and bands 4 and 5 were based on method of qualification to the World Cup. As such, the bands were organised as follows:

A representative for each band randomly drew four balls from a pot; the first ball went to Pool A, the second to Pool B, and so on. This ensured an even spread across all four Pools, and guaranteed that the top ranked teams would not all be drawn into the same Pool, as was the unfortunate case of the 2015 World Cup. Each of the five countries in each Pool will play four games; one against every other country in their Pool. The top two countries in each Pool will progress to the finals and automatically qualify for the next World Cup in 2023, while the third placed country will also qualify for the 2023 World Cup, however will not progress beyond the group stage. 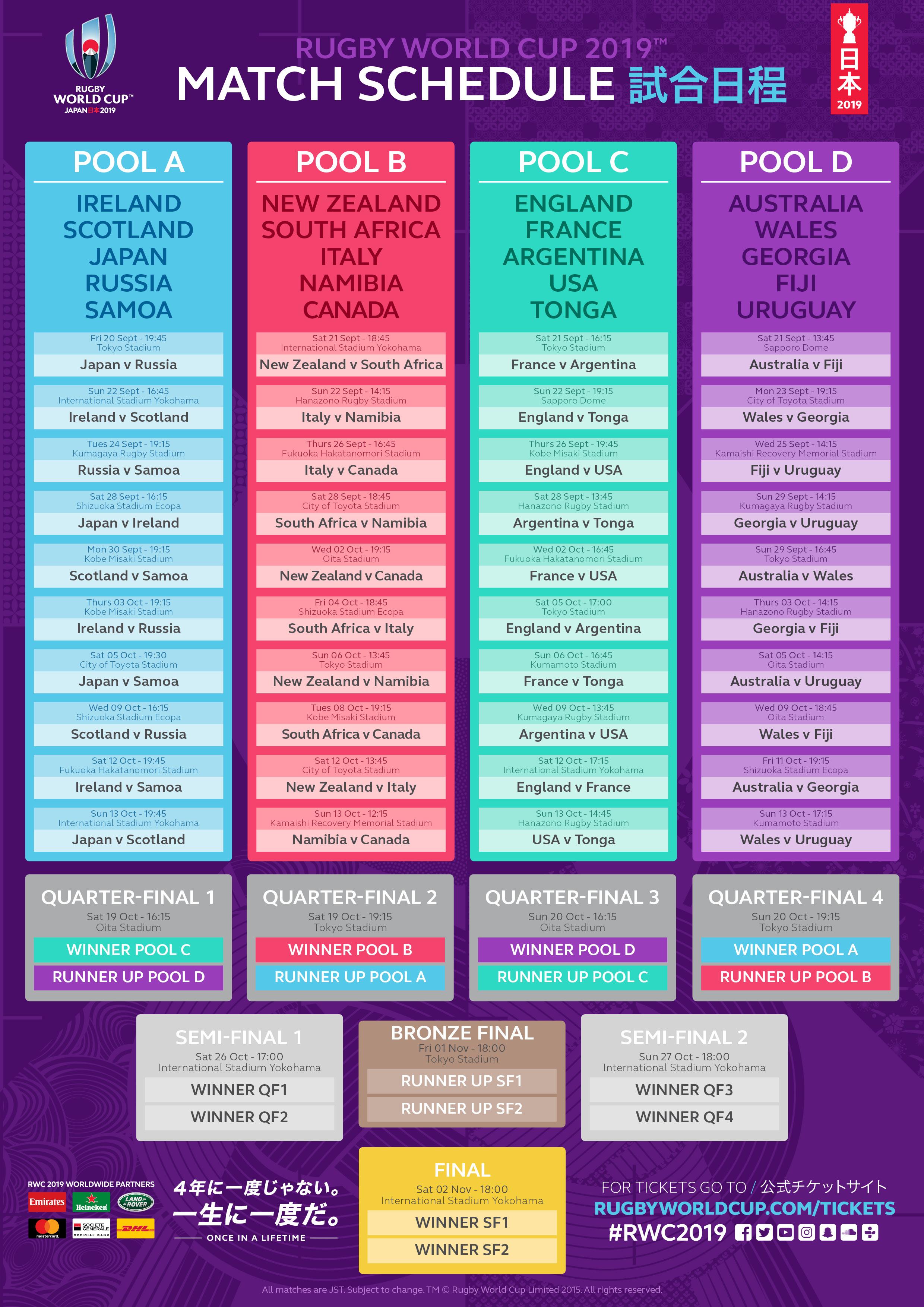 Pool A consists of Ireland, Scotland, hosts Japan, Russia, and Samoa. Ireland will be the favourites to top this Pool, but the race for the second finalist is very interesting indeed. On paper, you would suspect Scotland will wrap it up easily, but you would also be very brave (and perhaps a little foolish) to write off Japan too easily. The advantage of playing a World Cup at home cannot be understated. Russia and Samoa have done well to make it through the qualification stage of the tournament, but it is highly unlikely either will make it any further. It will most likely come down to a three horse race and while Ireland will be expected to take the top spot, Japan and Scotland will be fighting tooth and nail to snag the second finals berth. Look for all three to qualify for the next Cup, though.

Pool B consists of New Zealand, South Africa, Italy, Namibia, and Canada. To be perfectly frank, New Zealand and South Africa should breeze through this group and finish in the top two in a canter. The matchup between these two powerhouses should be an absolutely amazing game to watch. Unfortunately for the other three countries, they’ll be fighting it out for the third place and a guaranteed spot in France in four years time. As much as I would personally love perennial underdogs Canada take the ticket to France, I can’t see Italy dropping below third. That being said, I would be very surprised if Canada and Namibia failed to make through the qualification stages for 2023.

Pool C consists of England, France, Argentina, United States, and Tonga. This could well be the closest Pool of the tournament. Picking a winner between England and France is tough, and Argentina are very much a wild card to advance as well. The games between these three will definitely shape the finals more so than any other Pool. Unfortunately for the United States and Tonga, it is very difficult to see them picking up any wins over these three, much less advancing any further. The match between these two on the 13th of October should be an intriguing one, to say the least.

Pool D consists of Australia, Wales, Georgia, Fiji, and Uruguay. Australia will be smarting after being humiliated in the Bledisloe Cup earlier in the year and will be out to prove a point. Australia and Wales should wrap this up fairly easily, and Wales will be the favourites to top the Pool. As far as third place goes, I actually think Fiji will take it courtesy of an upset victory over Georgia. The beauty of World Cup is watching minnow nations take on established powerhouses and witnessing how they perform on the big stage. While I certainly do not expect Uruguay, Fiji, or Georgia to pick up more than one win, I am most definitely looking forward to watching them play Australia and Wales.

Pool A – Ireland and Japan.

We are in for a spectacular two months of rugby, folks. It should be a fantastic tournament and one to remember for a very long time.

Let’s enjoy every second of it!