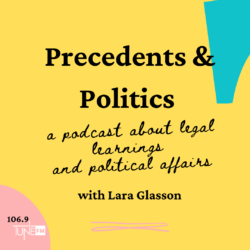 Precedents and Politics is a podcast about legal learnings and current political issues, with a handy sprinkling of indie pop music thrown in! The host, Lara Glasson, is a law and politics student at UNE and she gets particularly excited when law and politics collide.
Segments include a varied combination of:

You can catch the show airing on TuneFM every Tuesday at 3pm and previous episodes can be replayed as many times as you like through your preferred podcasting application!